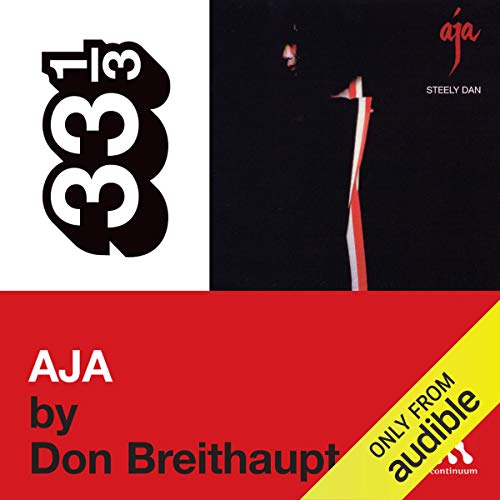 Virtuosic, ultra-cool, and polished to perfection, Steely Dan's 1978 stunner Aja remains one of rock and roll's most unique albums. With its sprawling, eight-minute tracks and its wry, sometimes inscrutable lyrics, it'd be tempting to say Aja is to rock what Gravity's Rainbow is to literature, but that would hardly do justice to toe-tapping pop perfection served up on such frothy tracks as "Peg" and "Black Cow". Musician Don Breithaupt unpacks this masterpiece, digging into the music's theoretical underpinnings and putting its singular construction - among other novelties, Steely Dan auteurs Walter Becker and Donald Fagen eschewed the band model and relied primarily on session musicians - into historical perspective. Part of the popular 33 1/3 series, this hip, knowing book gives Aja the analysis it deserves.

Aja was the album that made Steely Dan a commercial force on the order of contemporaries like Fleetwood Mac, the Eagles and Chicago. A double-platinum, Grammy-winning best seller, it lingered on the Billboard charts for more than a year and spawned three hit singles. Odd, then, that its creators saw it as an "ambitious, extended" work, the apotheosis of their anti-rock, anti-band, anti-glamour aesthetic. Populated by 35 mostly jazz session players, Aja served up prewar song forms, mixed meters and extended solos to a generation whose idea of pop daring was Paul letting Linda sing lead once in a while. And, impossibly, it sold. Including an in-depth interview with Donald Fagen, this audiobook paints a detailed picture of the making of a masterpiece.

I have 3 degrees in music and all I can say is that this book has taken a great album and made it boring through the overuse of music theory terms that most users will not understand. I was hoping that it would approach the story from a point of how the songs came about rather than saying "This song is based upon a chord progression of the IV-I chords essentially using a plagal cadence." Better save the money and just buy the CD.

Great for fans of the Dan

As the title states, if you are a fan of Steely Dan you will enjoy this. I am, and I did. Good for musicians looking to go into the hired gun/studio mercenary deal, although one can only imagine how different it is now from 40 years ago.

Brilliant! - so perceptive and knowledgeable.

This opened my eyes and ears to the inside games of Becker and Fagen, their musical brilliance and craft.
The only improvement would be to have the music playing at the same time as the relevant passage int he text.
Simply wonderful!