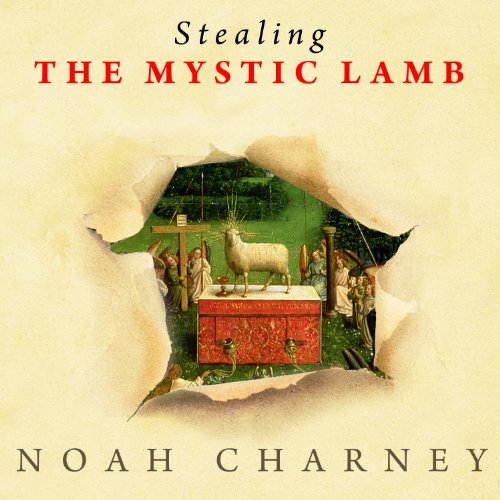 Jan van Eyck's Ghent Altarpiece is on any art historian's list of the 10 most important paintings ever made. Often referred to by the subject of its central panel, the Adoration of the Mystic Lamb, it represents the fulcrum between the Middle Ages and the Renaissance. It is also the most frequently stolen artwork of all time.

Since its completion in 1432, this 12-panel oil painting has been looted in three different wars, burned, dismembered, forged, smuggled, illegally sold, censored, hidden, attacked by iconoclasts, hunted by the Nazis and Napoleon, used as a diplomatic tool, ransomed, rescued by Austrian double-agents, and stolen a total of 13 times. In this fast-paced, real-life thriller, art historian Noah Charney unravels the stories of each of these thefts. In the process, he illuminates the whole fascinating history of art crime and the psychological, ideological, religious, political, and social motivations that have led many men to covet this one masterpiece above all others.

What listeners say about Stealing the Mystic Lamb

Snatching defeat from the jaws of victory

First of all, the narrator sounded like he should be doing tv infomercials for reusable paper towels. Second, the story should be very interesting ( I am a history buff) but strangely it isn't. Perhaps it was the need to constantly refer to the painting at issue during (especially) the beginning of the book; the inability to see what the author was talking about. The first quarter of the book seemed to be a description of the artwork; the second quarter was a general history of the artwork up to the first world war, the third quarter was about the theft of the panels in the 30's and the last part was about its rescue from the Nazis in WWII.

Some of the symbols were discussed, but not the mystic symbolism, other than the obvious. Even the parts which could have been exciting and suspenseful were not written to keep one's interest.

I wanted to like it, and I did learn a bit but was irritated the whole time. Perhaps it was the narrator -- listen first and decide if you can listen to hours of the guy.

Would you listen to Stealing the Mystic Lamb again? Why?

yes. Because there are many details that go missing in a first time through.

What was one of the most memorable moments of Stealing the Mystic Lamb?

the unique place in history the Lamb occupies

The narrator has a Jack Webb type staccato style that lacks suitable inflection to appropriately reflect the drama in the story. He also has a very poor command of French, and other non-English, pronunciation. Granted there are lots of nationalities' names in the story.

If you could give Stealing the Mystic Lamb a new subtitle, what would it be?

Entertaining story of the life, so far, of an eternally valuable work

the first 7 chapters the reader was going time and a half. all of a sudden starting with Chapter 8 it became a normal audio book. this is one that would definitely be better read.

Very interesting history lesson. it didn't live up to the Audible and Goodreads description, but none the less very good history story.

I found this book a hard read

I am acquainted with Noah Charney's podcast and Ted lectures. Found the subject interesting. In addition I wanted to learn more about Jan Van-Eyck and the book has a great biography of his. Beyond that, I found it difficult to follow the thread of information and the book seemed like a shopping list of names, events etc. Eventually I lost interest in the book

i would recommend picking up the paperback and reading it yourself as it is an interesting story.

a different narrator, one that doesn't speak with the same patronising, news anchor intensity throughout the whole ten hours. trust me, it gets very annoying.