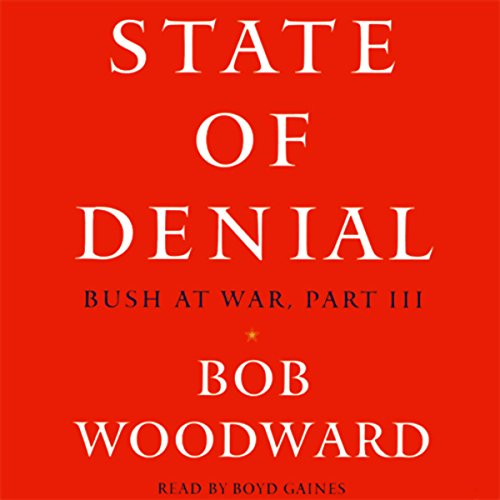 Bob Woodward examines how the Bush administration avoided telling the truth about Iraq to the public, to the Congress, and often to themselves in State of Denial. Woodward's third book on President Bush is a sweeping narrative from the first days George W. Bush thought seriously about running for president, through the recruitment of his national security team, the war in Afghanistan, the invasion and occupation of Iraq, and the struggle for political survival in the second term.

State of Denial answers the core questions: What happened after the invasion of Iraq? Why? How does Bush make decisions and manage the war that he chose to define his presidency? And, is there an achievable plan for victory? After more than three decades of reporting on national security decision making, including his two #1 national best sellers on the wars in Afghanistan and Iraq, Bush at War and Plan of Attack, Woodward provides the fullest account, and explanation, of the road Bush, Cheney, Rumsfeld, Rice, and the White House staff have walked.

"Mr. Woodward's first two books about the Bush administration, Bush at War and Plan of Attack, portrayed a president firmly in command and a loyal, well-run team responding to a surprise attack and the retaliation that followed. As its title indicates, State of Denial follows a very different storyline, of an administration that seemed to have only a foggy notion that early military success in Iraq had given way to resentment of the occupiers." (The New York Times)

What listeners say about State of Denial

Concerning and hard to put down

It's taken a while to write this review. It did NOT take this long to listen to this book, however. If you have any interest in U.S. foreign policy, why we are at war, and how we've come to this place in the war, this book is an interesting insight. Written by someone who has previously supported the Bush administration's direction in Iraq, Woodward assembles information and interviews into a quite understandable explanation. Though it always helps, I would say that you do NOT need U.S. foreign policy background to understand this book. I would say "enjoy", but frankly this isn't the kind of book that you can read and "enjoy". The issues are too real!

I’m Tired of the Hacks, Bring Back the Wonks

As a DOD consultant who works inside the beltway, there is nothing very surprising in this book. Basically it says what most of us had been pretty sure was the case for a while now. But it’s authoritative and careful and that adds value. If fact, it's Bob Woodward at his best.

My only complaint is with the abridgment. It’s already dense and it becomes so dense you almost have to take notes in order to keep the names straight. In many ways the unabridged hardcopy is much better.

Bob Woodward's book is shocking in its account of the Bush's administration's mismanagement of the war in Iraq. Listening to Woodward's book reminded me of something that I think most Americans have forgotten: The war with Iraq was a war of choice. It was not forced upon us. And the consequences of that decision is something all of us will live with for years to come.

Takes a fairly measured tone in explaining some of the problems with the Bush Administration. Would not describe the book as polemical. However, may be off-putting to devoted Bush supporters. Would encourage people to read the book before subscribing to pro- or anti- hype.

The book has topical interest and augments what is known, but the narrator is awful. He confuses gravitas with torpor. It is disconcerting to listen to someone read who sounds like he is getting ready to go into a deep sleep. The plodding nature of the audio gives the presentation a leaden quality.

I'm not entirely sure why, but I just didn't enjoy this book as much as the other ones. So 4 out of 5

If you're as mystified by The Iraq War as I was, this is the book that will finally help you understand.

The narrator's choice to impersonate the voices of the subjects of the book backfires with Woodward's voice. The attempt to imitate Woodward makes the reading slow, tedious, soporific. The impersonation of Bush is funny and entertaining but adds nothing to the content of the reading. Great book however, how does Woodward do it?

Woodward at his best.

I appreciated the inside story without the self-serving Bush administration "spin".

The book was great to read. Ultimately we will never know how accurate or inaccurate Woodward's Bush-era books have been. But if he at least hits on 50% of his information I will have been very glad to read his book.

You don't have to be against Bush to find value in this book. Some people surely will only this read to affirm what they have already made up in their minds about the former President. But I think it paints a deeper character of Bush, in a good way in many cases, than the 2D image you get while he is in office and shielded from real media encounters.

In an abstract sense, it is also provides great insight into how the behind the scene agency interactions have a great effect on the course of our nation. It gives life and character to the leaders of our bureaucracy in a way that can only help prepare each of us for the role of informed citizens we have to play out in our Democracy.