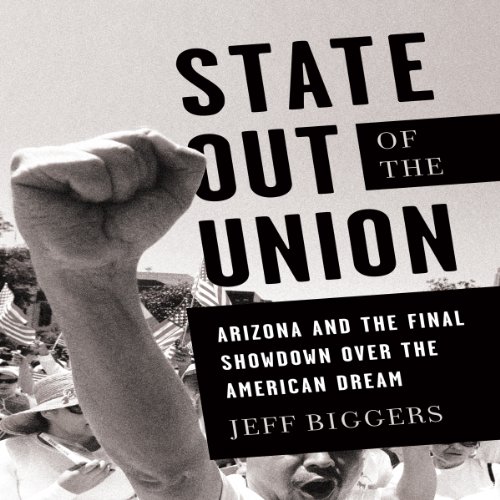 State Out of the Union

State Out of the Union is award-winning journalist and historian Jeff Biggers’ riveting account of Arizona, the famed frontier state whose conflict over immigration and state’s rights has become a national bellwether. Biggers shows how Arizona’s long history of labor and civil rights battles, its contentious entry into the union, as well as cyclical upheavals over immigration rights, place the state front and center in a greater American story playing out across the United States. From President Eisenhower’s Operation Wetback to the legacy of Arizona native son Csar Chvez to the powerful influence of the state’s politicians, like Sen. Barry Goldwater and Tea Party President Russell Pearce, Biggers reveals how Arizona has played a pivotal role in determining the nation’s conservative and liberal agendas.

Today, more than 25 state legislatures have introduced anti-immigration bills that are virtual copies of Arizona’s controversial SB 1070 "papers please" law. The state is ground zero in the clash over a historic demographic shift taking place across the country with the rise of a newly empowered Latino electorate. But Arizona is not only home to some of the most virulent anti-immigration legislation in the country - it is also the birthplace of a new movement of young Latino activists and allies who have not only challenged the self-proclaimed architect of SB 1070 in a historic recall election, but are also mobilizing to defend the state’s education system from censorship.

A lasting and important work of cultural history, State Out of the Union vividly unveils the showdown over the American Dream in Arizona - and its impact on the future of the nation.

What listeners say about State Out of the Union