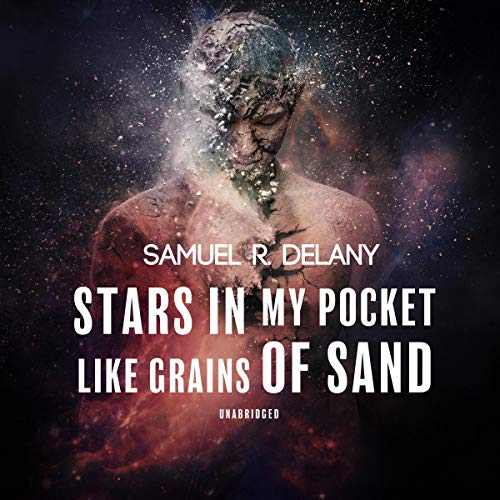 The story of a truly galactic civilization with more than 6,000 inhabited worlds.

Stars in My Pocket Like Grains of Sand is a science-fiction masterpiece, an essay on the inexplicability of sexual attractiveness, and an examination of interstellar politics among far-flung worlds. First published in 1984, the novel's central issues - technology, globalization, gender, sexuality, and multiculturalism - have only become more pressing with the passage of time.

This, my introduction to Delaney, is a mind-expanding, category-shattering novel rich in characters both familar and unfathomably Other. As prescient as William Gibson's cyberpunk (both the Web and a kind of universal Wikipedia are present) and as ethnographically subtle as Ursula Le Guin's Hainish books, with sophisticated flavors from queer theory and Sapir-Whorf throughout, "Stars in My Pocket Like Grains of Sand" is both ingenious sci-fi narrative and an experiment in literary cultural criticism.

Two formal comments. One, the reading is excellent but bassy, such that it works better in a room than a car. Driving, I had to continually adjust the volume or repeat passages. Two, this is a work so inventive that many of the words and some of the ideas (such as contrapuntal speech by multiple tongues) are better seen than heard. I picked up a used copy of the text and found it added greatly to my sense of the book.

3 hours in and still no plot.

I love this author but not this book

One must write ones own view of the world, expressing your views of the ideal and your frustrations with the actual.Of course acceptance of variation is correct . Mightn't these have been stated more simply.

Push a little harder and Delany might see daylight

I'm sure Delany is proud of this because by God does he make sure you know it.

Meandering doesn't describe this, even the most wayward river eventually goes somewhere.

As the title points out, I think he got a bit too carried away sniffing his own gaseous excretions and slipped. The desparate manner in which he scrabbles upwards through his own vast caverns does make one pity him, I only hope he reaches the sunlight again soon.