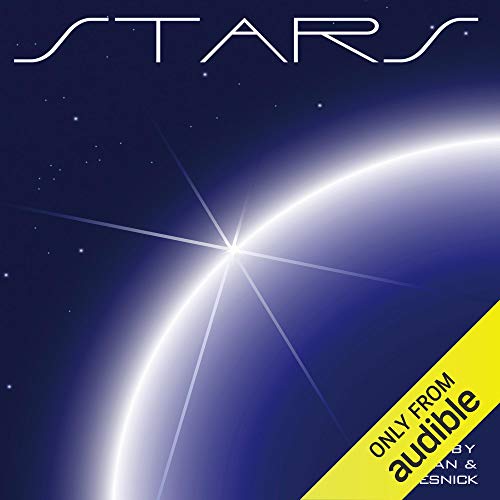 Janis Ian and 30 top science fiction writers team up to create an astonishing book of original short fiction. Stars is a huge anthology in both volume and talent. Each story, available only here, is based on a Janis Ian song that meant something special to the author, who then wrote the story expressly for Stars, creating a meld of jazz, prose, and science fiction found nowhere else - a treasure trove for fans of both SF and Janis Ian!

Ian, who won the Grammy Award for spoken-word entertainment for Society's Child, joins the cast of this intimate and unique audiobook to narrate portions of Stars and also to perform the music that inspired each story.

This edition of Stars also features an original new story by Michael Swanwick, "For I Have Lain Me Down on the Stone of Loneliness and I'll Not Be Back Again", based on "Mary's Eyes", a Janis Ian song that has always moved him to tears.

As Janis herself says, "The stories have heart. They have life. They have truth. They move me. As an artist, I can ask for nothing more."

"The narrators are paired perfectly with the stories. All are emotionally involved in these tales of outer space, the supernatural, and other sci-fi topics. Accents, emotions, intonation, and tension hold the listener's attention. Alien words are interspersed smoothly with standard English. This anthology takes the listener to new worlds and old and is perfect for hours of discovery." (AudioFile)

What listeners say about Stars

Listening was even better than reading!

Would you consider the audio edition of Stars to be better than the print version?

Yes, which surprised me.

What was one of the most memorable moments of Stars?

The maiden aunts, in Nightmare Mountain as read by Janis Ian

Never thought I'd get more out of listening than reading a book, but in this case I did.

I didn't remember the songs of Janis Ian being so hopeless and negative, but apparently doom, death and hopelessness are the themes all of these writers decided to address. The stories are well-crafted and if these themes appeal to you, it's well worth reading.