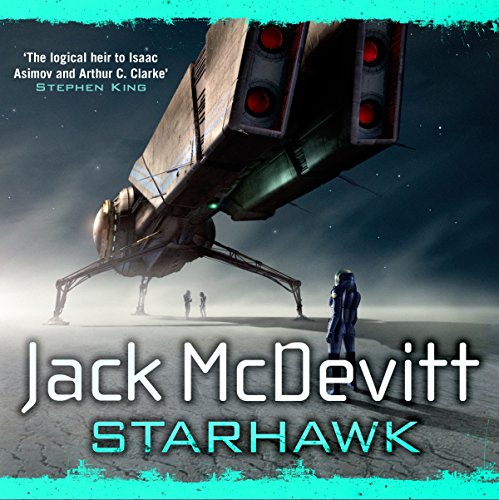 Interstellar pilot Priscilla 'Hutch' Hutchins has seen a lot of action. But now, multi award-winning science-fiction master Jack McDevitt gives us the thrilling, edge-of-your-seat tale of how it all began....

Hutch has finally realised her dream: she's completed a nerve-bending qualification flight for a pilot's licence. Her timing is far from optimal, however. Faster-than-light travel has only recently become a reality and the World Space Authority is still learning how to manage long-range missions safely. To make matters worse, efforts to prepare two planets for colonization are killing off native life forms, outraging people on Earth. So interstellar pilots are not exactly in demand.

Although Hutch fears her career may be over before it has begun, her ambition won't be denied and soon she is on the bridge of an interstellar ship, working for the corporation that is responsible for the terraforming. Her working conditions include bomb threats, sabotage, clashes with her employers...and a mission to a world adrift between the stars which harbours a life-form unlike anything humanity has ever seen.

Ultimately, she will be part of a life-and-death struggle that will test not just her capabilities, but also her character.

Jack McDevitt is that splendid rarity, a writer who is a storyteller first and a science fiction writer second. In his ability to absolutely rivet the reader, it seems to me that he is the logical heir to Isaac Asimov and Arthur C. Clarke - Stephen King
Why read Jack McDevitt?' The question should be: 'Who among us is such a slow pony that she isn't reading McDevitt? - Harlan Ellison
You should definitely read Jack McDevitt - Gregory Benford

What listeners say about Starhawk

This is a &quot;prequel&quot; to Jack McDevitt's &quot;Academy&quot; series, featuring Priscilla &quot;Hutch&quot; Hutchins, which does limit it slightly. She is only just qualifying to pilot a starship, under the mentorship of Jake, a Starsky to her Hutch - maybe. There are rumblings of things that will be covered in later books, but almost everything is pretty low-key here. We see things from Jake's point of view too, and he has his own chapters when they go their separate ways.

The book reminds me of a contemporary novel that just happens to be set almost two centuries in the future. A few alien worlds have been discovered, and there is a protest movement on Earth about the way terraforming may kill off alien creatures when it increases the oxygen content of the atmosphere... which leads to bombs on ships, and perhaps worse. And an orphan planet, drifting through space icy and alone, seems to have some sort of intelligence. We get 55 chapters, many ending with brief news items of the time. Our narrator Tavia Gilbert's slightly apologetic tones work quite well... but, while it's an interesting listen, it's no thrill-a-minute adventure.