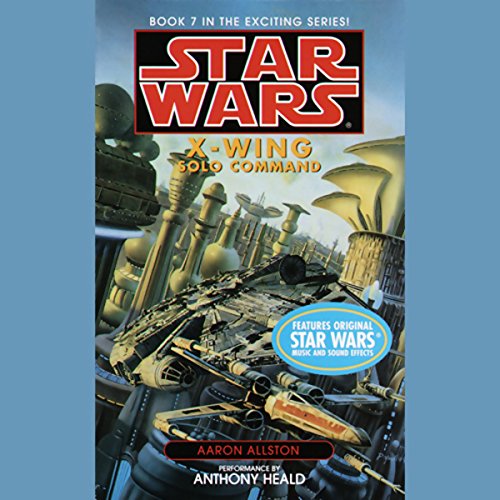 Wraith Squadron: they are the Rebel Alliance's ultimate strike force. Sleek, swift, and deadly, they are the first in battle, the last line of defense. Now they must find and destroy a wily enemy more powerful than the Empire itself.

Their covert mission has been a success. The enemy has been vanquished. Or so they thought. The Super Star Destroyer Iron Fist somehow escaped destruction, as did the New Republic's greatest threat, the infamous warlord Zsinj. To defeat him, Wraith Squadron must join a combat task force led by the only man crafty enough to beat Zsinj at his own game: Han Solo.

But Zsinj knows the X-wing fighters' indomitable courage is both their greatest strength and their greatest weakness. For even against the most overwhelming odds, the Rebels will fight to the death. And that will leave Zsinj the galaxy's unchallenged master!

What a shame that this terrific book has been completely clipped and destroyed. How can you justify the price on this??

A worthy finish for the trilogy.

I still have trouble with some of the pronunciations, but on the whole Anthony Heald does a good job. If only the stories were in unabridged format. Wonderful books that have lost some of their depth and flavour.

This is a great story. I wish it were unabridged. I can't. wait for more.

reader did well. the story continues enjoyed more the adventure, now for the next story

Conclusion of the wraiths till many years later.

Unfortunately abridged. So much humor and squad interactions has been removed. Better if you just want to kill time

The x-wings take on the forces of evil lead by the once smuggler now leader of Alliance.
Great story line keeps you wanting more