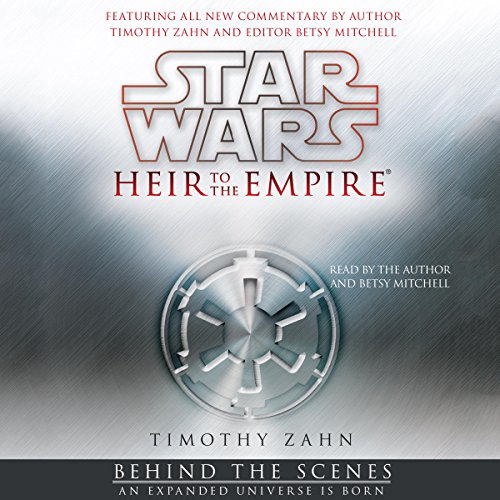 Star Wars: Heir to the Empire: Behind the Scenes - an Expanded Universe Is Born

Star Wars: Heir to the Empire: Behind the Scenes - an Expanded Universe Is Born

Star Wars: Heir to the Empire: Behind the Scenes is a special recording that features new commentary by author Timothy Zahn and editor Betsy Mitchell, written for the 20th anniversary edition of Heir to the Empire, read by Zahn and Mitchell. Included here is audio from the that new unabridged recording to enhance their comments.

The biggest event in the history of Star Wars books, Heir to the Empire follows the adventures of Luke Skywalker, Han Solo, and Princess Leia after they led the Rebel Alliance to victory in Star Wars: Episode VI Return of the Jedi.

Fan, but commentary that isn't from Zahn is poor and voices don't fit characters. Also very little content considering the same price as a full book

Takes a little time to get used to

The information is very interesting that is presented. However the playing a bit of the book and then fading out to a Timothy Zahn or Betsy Mitchell comment takes a bit to get used to. Kind of like watching a movie with commetary track on.

Great insight into the challenges faced

This was a great insight into the challenges author Timothy Zahn faced in kickstarting the EU. This is not something I would have normally purchased (unless it came free with the set), but I don't regret this one at all.

Commentary is interesting and exciting, but why not include this with the baseline 20th-anniversary edition?

Having both read and listened to the Thrawn trilogy this narrative by Zahn and Mitchell gives a humorous insight towards the method and struggles that had been faced in the creation of such a story that rivals the original trilogy. A must listen for any fan of the books.

If you could sum up Star Wars: Heir to the Empire: Behind the Scenes in three words, what would they be?

What other book might you compare Star Wars: Heir to the Empire: Behind the Scenes to and why?

Have you listened to any of Timothy Zahn and Betsy Mitchell ’s other performances before? How does this one compare?

I have not heard their previous works. This is my first foray but from that alone I was very impressed it felt like a DVD documentary but for books. I loved every moment of it.

This book gave me another dimension to the story from the author's POV. I wish it was longer! It had everything. There were plenty of surprises on how it came to be which left me giddy.

I highly recommend this to anyone who loves Star Wars in general but also is curious on the inner workings of the author's journey in making such a tale, this is for you.

Great hearing all the behind the scenes information on one of my all time favorite novels I hope the other books in the trilogy get similar treatment someday.

so inspirational...funny interesting and sentimental too. loved it...made me want to pick up a pen and start writing!

Behind the written star wars universe.

Where does Star Wars: Heir to the Empire: Behind the Scenes - an Expanded Universe Is Born rank among all the audiobooks you’ve listened to so far?

Since this is a look at the written universe, this ranks as one of my best books listened to.

What was one of the most memorable moments of Star Wars: Heir to the Empire: Behind the Scenes - an Expanded Universe Is Born?

I would have to say the entire program.

Have you listened to any of Timothy Zahn and Betsy Mitchell ’s other performances before? How does this one compare?

Yes. This one is just as good as the others I have in my library.

This is a short program, you can listen all at once.

If you are a star wars fan, and you love the novels, as well as the films, you will love to listen to this great look behind what it takes to make a star wars novel, and it is great to hear the author comment on his own novel. I would recommend listening to the complete novels in this series. Star wars heir to the empire,dark force rising, and the last command.