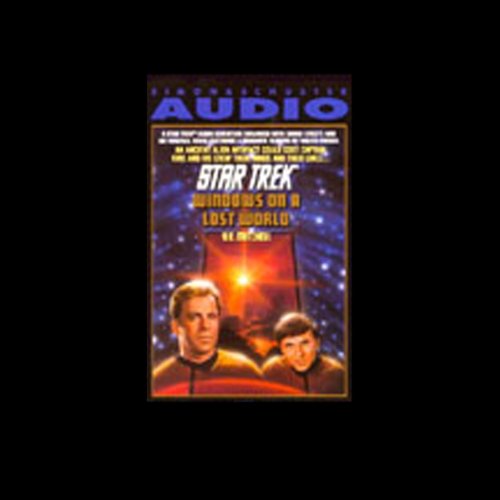 When Captain Kirk and a landing party from the U.S.S. Enterprise explore the ruins of an ancient civilization on the uninhabited planet Careta IV, they discover strange devices that appear to be windows. But the mysterious windows prove to be more than they seem when Kirk, Chekov, and two security guards enter them and disappear. Suddenly, Kirk and his team find themselves trapped in a strange alien environment and must fight with all their strength to survive and keep their sanity. Now Spock must locate his missing comrades and solve the windows' ancient mysteries before his captain and crewmates are lost forever...

What listeners say about Star Trek: Windows on a Lost World

Overall a good story. Mr. Koenig is a great storyteller and portrays his costars nicely. My one note is that there is some skipping in chapters 1 and 2. Not bad, only a few seconds, but it sounds like a glitch in the recording.

Good book but story is forgettable. Narrator does good job, but it is strange having Chekov doing the talking, a bit distracting.

Would you try another book from V.E. Mitchell and/or Walter Koenig?

Probably, I am after all still a Star Trek Fan but Walter Koenig is not the most dynamic of readers.

Would you ever listen to anything by V.E. Mitchell again?

I'm sure I will sometime in the future.

Which character – as performed by Walter Koenig – was your favorite?

Obviously Checkov, he's not very convincing as any other character.

Dissappointment and Disbelief in the outrages story line.

The story is simply a stretch even for Star Trek fans.

Really, what a silly plot! I can think of a lot better adventures for our heroic captain that this exchange of bodies.

This was my first foray into the world of Audiobooks, so I thought I would play it safe and opt for book that I knew would be something I would definitely like.

I am fan of Star Trek, especially The Original Series, so it was simply a matter of browsing through the myriad of ST titles until I found one that I thought sounded interesting. I opted to go for Windows on a Lost World because it was narrated by Walter Koenig, who played Pavel Chekov in the TV series.

My first reaction was one of surprise, the addition of sound effect (background noise, the swoosh of the doors opening, etc) was not expected, nor was the addition of music, but I soon got used to it - and to be honest it helped to create the 'mood'.

Mr Koenig makes a good narrator - he is very good with the voices of the various characters, helping to differentiate during the scenes. The only character he struggled with, in my opinon, was that of Scotty, the ship's cheif engineer. As a native of the UK, I have to say it was funny to hear his attempt. However, this doesn't detract from his performance, as Scotty only has a few scenes. On the other hand, his versions of Kirk, McCoy and Spock are great (especially Spock).

The story, revolving around the discovery of an ancient artifact and the consequences of the archealogical studies, is average. There is nothing special about this tale - it is a typical Trek foray into the unknown, but with a little twist. Perhaps it was just not what I expected, perhaps I was hoping for more interaction between the main characters. The 'baddies' in this tale are not what you are expecting.

Overall, I thought it was a nice introduction to ST audio, Mr Koenig does a handsome job, but the story could have been better. I'll be trying out some more ST books again.