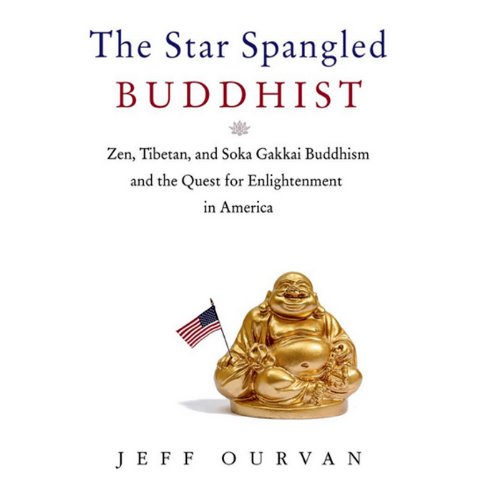 Jeff Ourvan mixes his personal experiences as a practicing Buddhist with informative overviews that demystify the histories and practices of the three major schools of American Buddhism, organized in sections by the Three Jewels: the Buddha, the Dharma, and the Sangha. Kevin Young's leisurely, upbeat performance highlights the clarity and the touch of self-effacement that make Ourvan's Star-Spangled Buddhist so accessible.

Perceptive and passionate, this succinct outline articulates how Buddhism's emphasis on acceptance and the quest for personal enlightenment has appealed to Americans, changed through its contact with them, and why it might be the faith that is most adaptable to an increasingly interconnected global culture.

The full story of Buddhism in the United States - illuminated and enlightened for today’s listener.

Approximately four million Americans claim to be Buddhist. Moreover, hundreds of thousands of Americans of various faiths read about Buddhism, are interested in its philosophical tenets, or fashionably view themselves as Buddhists. They’re part of what’s been described as the fastest growing religious movement in America: a large group of people dissatisfied with traditional religious offerings and thirsty for an approach to spirituality grounded in logic and consistent with scientific knowledge. Star-Spangled Buddhist is a provocative look at these American Buddhists through their three largest movements in the United States: the Soka Gakkai International, Tibetan/Vajrayana Buddhism, and Zen Buddhism.The practice of each of these American schools, unlike most traditional Asian Buddhist sects, is grounded in the notion that all people are capable of attaining enlightenment in “this lifetime.” But the differences are also profound: The spectrum of philosophical expression among these American Buddhist schools is as varied as that observed between Reformed, Orthodox, and Hasidic Judaism.

Star-Spangled Buddhist isn’t written from the perspective of a monk or academic but rather from the irreverent view of author Jeff Ourvan, a lifelong practicing lay Buddhist. As Ourvan explores the American Buddhist movement through its most popular schools, he arrives at a clearer understanding for himself and the listener about what it means to be - and how one might choose to be - a Buddhist in America.

What listeners say about Star-Spangled Buddhist

This is a very well researched and explained book. I knew very little about Buddhism - just enough to teach a Short unit to ninth graders -and now feel I have a much stronger grasp.

If you’re looking for a book that will bring out all the dirty laundry from Zen an Tibetan Buddhism while glossing over SGI issues, this is for you.

This book is so boring!

This is just a very boring book. I found nothing useful or original about it. And the reader just put me to sleep.

What disappointed you about Star-Spangled Buddhist?

It's a shame that such a great idea to introduce the differing sects of Buddhism and how they operate in the west can be marred by such an incredible lack of morality when it comes to following the Fourth Precept (truthfulness). The author goes into GREAT detail about how Zen priests are often accused of sexual immorality, how Tibetan Lamas are chain-smoking womanizers but when it comes to the sect (cult) of Buddhism the author belongs to (Sokka Gakkai) comes up almost nothing incriminating is mentioned. At no point in the book does he mention that the President (who he lovingly refers to as a "mentor to millions" rather than a millionaire cult-leader) has said"I recommend that you accumulate good fortune [through chanting] in this life, so that in the next existence of life, you can be born into a family possessing five Cadillacs."and has "encouraged to chant for the destruction" of rivaling sects of Buddhism and their respective priests.

Has Star-Spangled Buddhist turned you off from other books in this genre?

well intentioned but lots of mispronunciations

Would you try another book from Jeff Ourvan and/or Kevin Young?

Jeff is well intentioned, but is a bit of a Soka Gokkai cheerleader, and leaves out entire fundamental traditions of Buddhism which are practiced in the US. Kevin Young has a decent voice but his mispronunciations of basic words like "Rinpoche" are cringe inducing.

I should have listened to the reviews.

Would you try another book from Jeff Ourvan and/or Kevin Young?

Has Star-Spangled Buddhist turned you off from other books in this genre?

It was more the writing than the reader.

What character would you cut from Star-Spangled Buddhist?

Very disappointed in the blatant self promotion and lack of substance. Glossing over hypocritical statements for the benefit of the viewpoint.