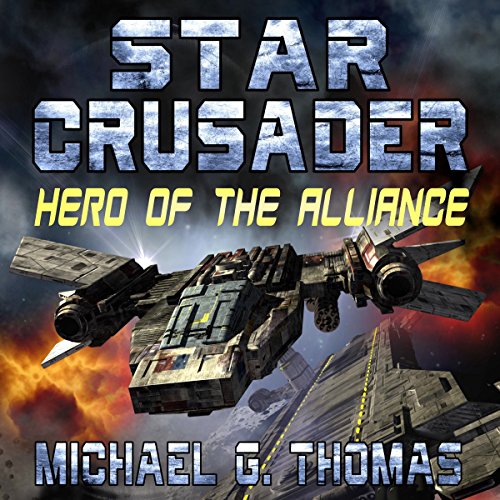 By: Michael G. Thomas
Narrated by: Andrew B. Wehrlen

Nate has a talent for space combat after hundreds of victories in the Star Crusader videogame simulation. His skills are unique, enough to gain him a rare privilege: the chance to join five other Alliance cadets and escape the dull routine of the classroom. They will enter a fierce competition light-years away in the ancient Byotai Empire. Yet days after their arrival a rebellious faction begins a bloody mutiny that spreads like wildfire. The time for competition has ended; the time of war has begun.

A handful of capital ships attempt to avoid the massacre, but only Relentless escapes. Nate and his friends are aboard, part of the few to make it out alive. Relentless is a heavily armored assault ship, a relic from another age, but most of her crew members are dead or missing. Nate and his fellow cadets have to face the unthinkable. Under the guidance of Lieutenant Higgins, the ship's last fighter pilot, the six cadets have just days to practice operating the ship's fighters. There are no others. Only they can defend the ship, or face death at the hands of the enemy.

This book is, for the most part, exactly what I expected. The site description is pretty spot-on for this book.

Nate, the main character, is part of a group of students that have the top rankings in simulated flight combat. Flight simulations have become essentially the football of the future. Different worlds and races compete in simulated military flight missions as games. When the group of students competing on another world, the local citizens overthrow their government and attempt to kill or capture all of the humans in the system. The students flee on a damaged, outdated assault carrier with limited supplies and very few crew members. With all but one pilot lost in the initial escape, it is up to Nate and his friends to pilot the remaining drones and fighters (the ship's only significant defense).

The story itself wasn't bad. I found the backstory and description of the rebellion in the beginning a little confusing. All of the student pilot characters are also pretty stereotypical. Main character, girl he's interested in, best friend, boy he competes and argues with, etc. I found the plot a little unbelievable at some points as well, but nothing too bad.

Narrator was good. Definitely a good fit for this book.

Overall it was a decent listen. Lots of action, dogfights, suspense, etc. It was good enough that I'm probably going to listen to the next one in the series.

I received a free copy of this audiobook from the author, publisher, or narrator in exchange for an unbiased review. I was NOT required to write a positive review and this reflects my honest opinion of the work.

Hero of the Alliance, the first book in the Star Crusader series, if a decent and enjoyable YA-level military sci-fi adventure. The backstory is a bit shallow to start but thankfully gets deeper further into the series as a whole (some in the first book, more so later). Nate, the primary protagonist, is by far the most fleshed-out character, with the others starting fairly one dimensional and slowly gaining depth as situations warrant changes in their characters. While the descriptions of military action are not up to the level of a book published by a bit name like Baen, they are decent and move along nicely. The biggest issue for me personally was some of the physics. An especially annoying example being when the ship gets to another system "a million kilometers away" from where they started with a black hole present, far too close for separate star systems and too close to a black hole not to be experiencing the effects of massive gravity and time dilation. As long as you don't worry about the physics too much, the book was an enjoyable start to what promises to be a fun, light military sci-fi series.

Disclaimer: I was given this free review copy audiobook and have voluntarily left this review.

It strikes me that there doesn't seem to be a explanation for the stars that are given. So I thought I'd start giving my take on it.
1 horrible no redeeming qualities.
2 there are redeeming qualities.
3 good worth reading, or well written but not my cup of tea.
4 great but there's something off.
5 loved it.

A good beginning for a series. I can't wait for more of this, I want to say more about this story but I absolutely hate spoilers, so I won't go into it.

I've recently had several conversations with people that have said that one of the things they'd like to see in a review is if I'd read/listen to it again. So I'm now adding that to my reviews.
Yes I'd listen again.

The narrator brings the story to life.

This Audiobook was given to me for free at my request from the publisher, author or narrator and I provided this unbiased voluntary review.

The story is good, though not great. In the beginning I thought perhaps this was the book form of the movie The Last Starfighter, as there is a video game that is used as a recruiting tool. That is just a similarity, and they are indeed different stories.
The pace of this book is reasonable. There is some action, separated by long stretches of very little happening. This is understandable, as the lulls are dedicated to the training of the young pilots. I would have liked character development beyond the protagonist during all that training, but the others underwent minimal growth beyond improving their skills.
Andrew Wehrlen is one of the better narrators out there. He delivers another solid performance in his signature style. For those not familiar with his work, he has something of a unique cadence when he reads. There are parts that either speed up or slow down unexpectedly, but in ways that make the listening experience unique. It may take a little getting used to, but it’s a little flair that sets him apart from other narrators.

I received a free copy of this audiobook in exchange for an honest review.

What made the experience of listening to Star Crusader the most enjoyable?

I enjoyed the sharp, observant nature of Nate’s mind and the rivalry and friendships among the cadets. Each of the teens have unique strengths that make them a valuable team if they will work together.

What was one of the most memorable moments of Star Crusader?

I liked the young, brave characters and was fully engaged

What about Andrew B. Wehrlen’s performance did you like?

Andrew B. Wehrlen did a very good job with the narration. He captures the youthful personality of the cadets and is still able to pull in the older characters too. I had no trouble following the thought processes and action. I fully enjoyed the audio listen

I was voluntarily provided this free review copy audiobook by the author, narrator, or publisher

Perhaps if I were Twelve....

This story was irritating. It is geared to adolescents, and I wish Audible would categorize or otherwise flag such productions

Great audio book. Good for adults and young adults alike. Lots of action goo story keeps you hooked. I'm looking forward to the rest of the series. I received this audio book for free from the author, narrator or publisher for free via audiobook blast in exchange for an unbiased review.

Good Listen After a Rocky Start

What aspect of Andrew B. Wehrlen’s performance would you have changed?

At the beginning of the story some of the voices are very stilted and awkward to listen to.

I received a free copy in return for an honest review

An enjoyable YA military Scifi experience. As someone who enjoys following various competitive video game scenes certain aspects of how the "Star Crusader simulation" was portrayed bothered me. That being said I still enjoyed the authors take on scifi.

I wish it was a bit longer as it was only 7.5 hours

ScoobyDoo in pace (without the dog)

Every element of this book is derivative and pedestrian. While there is some creativity in terms of battle descriptions, the author doesn't seem to have any military knowledge and it shows. Imagine a starship Captain rushing toward a group of inexplicably disabled ships saying there is no time for caution.

Even as a YA novel, it fails as the characters don't develop or experience meaningful adversity. The narration is first rate.

Nate is a seventeen-year-old who has played hundreds of games on a vidogame known as Star Crusader. Based on his successful victories Nate has won a place in the Alliance cadet program. The Alliance is a space program set up to defend against attacks. The Alliance has a shaky relationship with the Byotai Empire who are an aggressive lizard-like race.

Nate and five other teens are shipped off to a far off spaceport to participate in active battle competitions against the Byotai trainees. The kids are in class when a rebellion breaks out. They barely escape the room trying to make their way to the marines seeking flight to their capital ship. Nate and his friends are among those who get out with the help of the marines, including a tough female.

When the dust settles from the first battles many of the crew members, including pilots, are gone and the capital ship is struggling to get to a rendezvous with other Alliance ships. Reluctantly the last of the fighter pilots, Lieutenant Higgins, who is injured, begins training the cadet pilots on the ship's fighters. The capital ship will stagger along with the thin hope that a handful of teen cadets will be able to defend her if they run into any enemy, especially before they get to restock their supplies and weapons.

I enjoyed the sharp, observant nature of Nate’s mind and the rivalry and friendships among the cadets. Each of the teens have unique strengths that make them a valuable team if they will work together. Before the end of this action packed story they will face the enemy and learn that they must use their skills together to be successful in their mission.

I picked this title as it reminded me of The Last Starfighter. Although it starts with the videogame the rest is a new story. The characters are distinct, if not fully developed, and the action is pretty much nonstop. When this started I thought it might be more suitable to a younger audience. However, as the work progressed I found that I liked the young, brave characters and was fully engaged. I realized after finishing this book that it is the first of four in the current series. Apparently there are older series with a prior generation that lead into Nate’s generation. For now, I will be lining up the current set through Audible but I’ll be eyeing those prior books when I need a good sci fi fix!

Audio Notes: Andrew B. Wehrlen did a very good job with the narration. He captures the youthful personality of the cadets and is still able to pull in the older characters too. I had no trouble following the thought processes and action. I fully enjoyed the audio listen.

I received this title from the Author through Audiobook Blast, for an honest review.