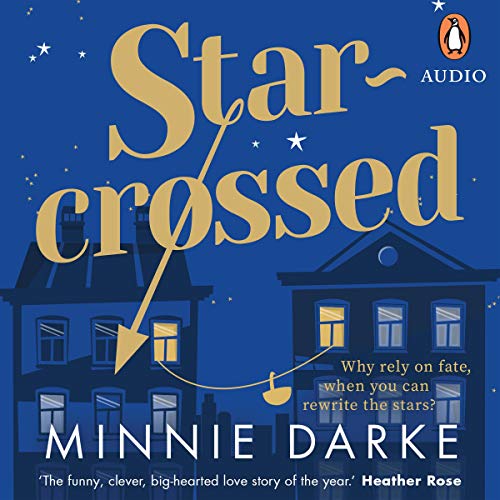 In this sparkling romantic comedy, a young journalist tampers with her magazine's horoscopes to win her friend's heart - and sets in motion an unpredictable and often hilarious ripple effect....

When Justine Carmichael (Sagittarius, aspiring journalist and sceptic) bumps into her old friend Nick Jordan (Aquarius, struggling actor and true believer) it could be by chance. Or perhaps it's written in the stars.

Justine works at the Alexandria Park Star - and Nick, she now learns, relies on the magazine's astrology column to guide him in life.

Looking for a way to get Nick's attention, Justine has the idea of making a few small alterations to 'Aquarius' before it goes to print.

It's only a horoscope, after all. What harm could changing it do?

Charting the many unforeseen ripple effects of Justine's astrological meddling - both for herself and others - Star-crossed is the funny, super-smart, feel-good novel of the year!

"The funny, clever, big-hearted love story of the year. Brilliant!" (Heather Rose, best-selling author of The Museum of Modern Love)

"This delightful debut will leave you with a warm glow...In every way a delight, Star-crossed was so much fun this reviewer fell head over heels for it. If you loved David Nicholls' One Day, go out and buy this now." (Herald Sun)

Loved this book so much! Really beautifully written, all the moving parts come together is such a satisfying, cool way. And the audiobook was a great way to experience the story, the narrator sounded really warm and loving and familiar. I could listen to her all day. 10/10, have already sent to my friends ahead of Christmas!

Absolute star of a book

The story is original and funny. Could not stop listening. Awesome narration too. Give me more!

Loved this book. And that's saying something because I'm generally not a fan of chick lit or books with excessive swearing. Be warned, this author does use the F word excessively in my opinion. I'm also not into astrology. However the story is clever and fun, and full of surprises. I don't want to give too much away but there are a lot of minor characters introduced throughout the book and surprisingly this didn't annoy me, but rather, I found myself caring about each character and wanting to know how their story turned out.
The narrator was excellent.

The narration of this story is superb. The story its self frustrating because what I really wanted was more about Justine and Nick.
It started off really well and grabbed me immediately but then became a collection of short stories about Incidental characters that I had little interest in, even though I recognise that was the point of the story. But not the story I was expecting. I loved the first few chapters and the last few but was thoroughly bored for the middle two thirds.