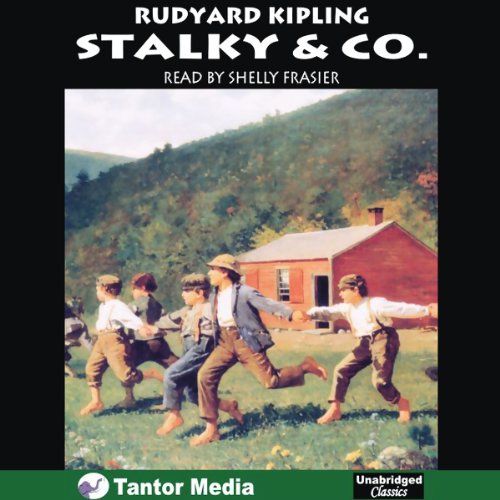 Based on Kipling's own adolescent experiences, Stalky and Co. is a cunning story of mischievous 19th century British schoolboys attempting scholastic mutiny. The faculty and headmaster of a boys' private school repeatedly pursue a trio of poetic pranksters, "Stalky", "Beetle", and "Turkey", as they wage war on fellow students and the "establishment" with unwavering energy and creativity.

Stalky and Co. is, at times, poignant in its realistic portrayal of boys negotiating manhood, and hilarious in its illustration of their relentless attempts to beat the system, even in the face of creative punishment and a savvy housemaster. Listeners of all ages will delight in this tale of ingenious schemes and rebellious antics.

What listeners say about Stalky and Co.

sad to say the reading ruins this delightful book

I love this book set in North Devon where my family holidayed each summer in the1950s. Unfortunately the reader mispronounces so many of the words that it irritated me so much that I changed to a different version altogether. For instance 'combe' rhymes with doom not home, mostly 'row' in this story matches cow and now rather than low and the word precis has a silent 's. The accents are a very pod mix - M'turk should be Irish and the local characters ought to have the burred soft West Country accent as often used by Monty Python to portray country yokels.

This is one of Kiplings best books and should have been be a good introduction to many reader/listeners. Unfortunately the reader has little concept of what an English accent of that period might be like and the Dick-Van-Dyke accent with other very odd accents seriously detracts from the reading. The worst however is the mispronunciation of English words. Ok, so they are not in every day use in the USA but perhaps the reader should have found how to pronounce "coombe" etc.

Read by an automaton

Would you try another book from Rudyard Kipling and/or Shelly Frasier?

I would never try another book read by Shelly Frasier. The singsong tone, the random emphasis on words that don't need it and omission of emphasis on those that do, not to mention the misreading of the actual words made it difficult to appreciate this fabulously funny book.

Would you try another book written by Rudyard Kipling or narrated by Shelly Frasier?

I would try another book by Kipling - I already have Kim but I wouldn't buy a book written by an English author read by Ms Frasier. I can forgive appalling pronunciation of such place names as Bideford and Clovelly but to pronounce Stalky as Starky and Beetle as Beedle makes it hard to keep track of a well loved book. In fact, if I didn't know the book well, I would have given up somewhere in the middle of chapter 2. When words such as row are mispronounced, I am appalled. If one hasn't read the book hearing about a row (as in the boat race) when in fact it should be a row of the heated variety (to rhyme with bough) it would be difficult to understand what is happening. The use of accents in narrated books is commendable, but the Devon accent is transformed into an Irish type of voice and the Irish accents of the Colonel and Turkey have a mid-Atlantic feel. To say I was disappointed is a gross misunderstatement.

Which character – as performed by Shelly Frasier – was your favourite?

I didn't like any of the characters, whom I know and like from reading the book, in this version.

I love the book, I hated this version of it.

If you are going to sell classic English books please let people know the narrator is not English so that they can decide if to buy it.

This wonderful classic was absolutely ruined for me by the appalling narration! The narrator's attempts at Enlish and Irish accents would have been laughable had they not grated so badly on the ear, coupled with her decision to read all at a breakneck speed made the whole thing completely unlistenable.

It's not that the narrator is bad, but that she made no effort to get the pronounciation correct. In a book where the dialogue is variously in 19th century English slang, French, Latin, & Devon dialect this leads to a performance where. there's something jarring in every chapter.

This book was my childhood favourite and I still know it more or less by heart. I was delighted when I saw it was available on Audible. I have to say I was somewhat disconcerted however when I started listening to discover that the narrator is (a) female and (b) American - I didn't think that would be at all in keeping with the quintessentially English public school nature of the book - but as the story progressed this didn't matter at all - the narrator picked up all the right nuances and I found it an excellent listen. It was a real joy to revisit this old friend. Highly recommended !