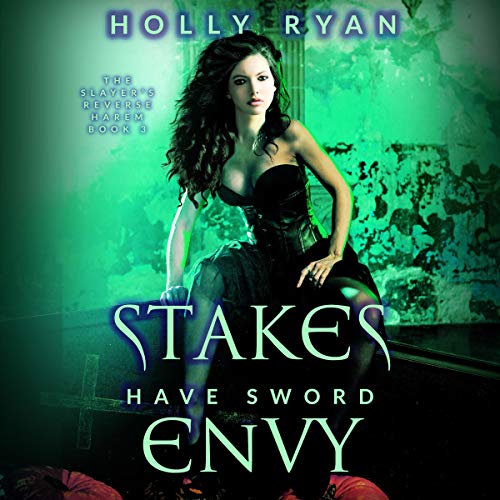 They say if one door shuts, another opens. No. Slam it closed, lock them both, and don’t touch anything.

The door to the graveyard’s mausoleum won’t shut. It’s standing wide open in invitation to Paul, the dark unknown who wants Belle, vampire slayer and…uh, layer, dead. Because someone - or something - is helping him.

Well, f--k. After a race against time to find out who, Belle and her three hot vampires must make an impossible choice - let Paul get what he’s after inside the mausoleum or rush straight into a trap to find a way to kill him.

What listeners say about Stakes Have Sword Envy

This series continues to be great with heroine Belle Harrison and her vampires. Melissa Schwarz is a really good voice actor. I thoroughly enjoyed her performance. I was given this free copy audiobook at my request and have voluntarily left this review.

Wonderfully entertaining and entertaining series loved it. Narrator did a fantastic job also on this audiobook.

I just can’t stop. The stories get better and better and I get more sucked in with each one. Such twists and turns.

This is one crazy adventure of Belle. As always, I am satisfied with this audio. The characters are still amazing especially Belle. Will Belle be able to kill Paul? It’s a must listen to.

This is another great audio by Ms. Holly Ryan. I can’t wait for the next one!

So much happened in this story especially about the Applet tomb and Detective Applet himself. Belle stayed strong and her 3 vampires are always ready to help her.

This book 3 is just as awesome as book 1 and book 2! It’s a must listen if you want a dark, bloody and sexy story. Belle’s character is just amazing!

These stories keep getting better and better! So much adrenaline from this story. I love it!

Getting bloodier yet more exciting. Belle is exhausted but she can’t stop. Such a gripping story and more revelations than ever. Really great audio!

Another crazy adventure with Belle, the slayer!

Story: Another short book. I still don't feel like Belle has made any progress as far as getting better at being a slayer, getting better at shielding herself against Paul (whatever he is) or just, in general, knowing what the heck is going on! And then at the end, she finally has the book and it's over. I really wish they'd explored the books in the library too which could have provided more answers. I'd also like to know what exactly happened to Eddie. We shall see if I pick up the next one. It's was an okay story but I'd like to see a lot more things answered in the books.

Narration: Melissa Schwairy was absolutely amazing as usual!!! She does a great job of distinguishing between the characters and putting all the emotions into the story.

This series just gets funnier!

An action packed third instalment of the Slayer's Reverse Harems series. Belle continues to kick-a$$ and take names, and grows into her role as the heroine. The drama increases as the threat grows, and answers dangled just out of reach along with more questions! This series has grown more addictive with each book, with a good dose of humour, I have the next book ready and can't wait to get started!