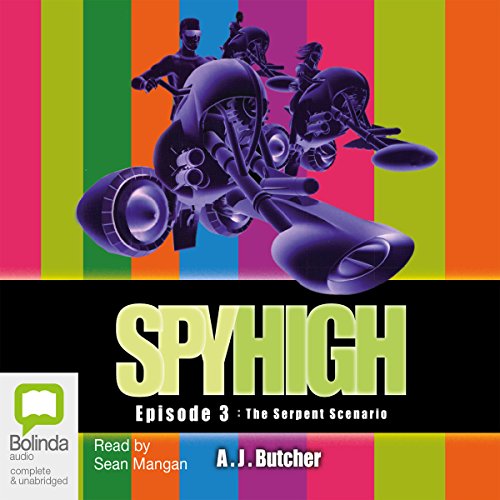 By: A. J. Butcher
Narrated by: Sean Mangan
Free with 30-day trial

Audiobook number three in A. J. Butcher's series on teenage secret agents-in-training features Jennifer Chen, who becomes the first student in Spy High history to leave campus on her own (very dangerous) mission. When the Bond Team sets out to find her, they uncover a new drug sweeping Undertown, LA - Drac, an instantly addictive substance that gives users a craving for blood. The team must figure out a way to stay alive long enough to find Jen and shut the dealers down. An enjoyable fast-moving, action-packed tale, expertly narrated in Sean Mangan's dramatic baritone.

The next thrilling installment of the internationally popular Spy High series.

Follow the fast-paced action adventure of six kids as they are thrown into Deveraux Academy - the underground training ground for young secret agents whose job it will be to stop megalomaniacs and terrorists which threaten the world.

It's utterly forbidden for students to leave the Deveraux College grounds - except on official Spy High business. The punishments are legendary and no one has gone AWOL in living memory - until Jen. Jake's convinced it has something to do with her murky past on the streets of L.A. and persuades Bond Team to mount a search. But instead of Jen, all the trainee agent finds in Undertown L.A. are rival gangs dealing in a deadly new drug known as Drac. Drac is instantly and horribly addictive, turning users into pumped up zombies with an alarming desire for fresh blood. It's going to take all of Bond Team's training to stay alive long enough to locate Jen, and - more than that - to shut the dealers down.