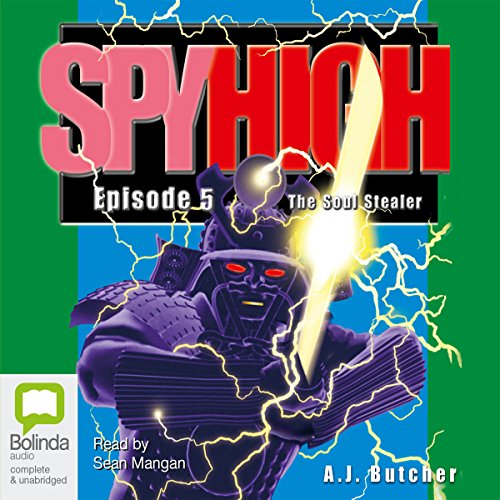 By: A. J. Butcher
Narrated by: Sean Mangan

This fifth installment of A. J. Butcher's series about a high school for secret-agents-in-training follows Benjamin T. Stanton, the cocky leader of the Bond team. Stanton has always been a golden boy and he knows it, but his life is starting to fall apart under the pressure of the upcoming Spy High exams. Things only get worse after the Bond Team's investigation of a shadowy cult implicates Benjamin's own beloved uncle. Performer Sean Mangan's smooth baritone is a great fit for the story, which features well-developed characters battling their way through plenty of action, drama, and suspense.

They've busted techno-terrorists, outwitted crazed scientists, and taken on nightmare genetic freaks, but Bond Team has never faced anything like THIS before. The Spy High final exams are two grueling weeks of simulated espionage missions. Bond Team will be deprived of sleep, food and water, given dodgy weapons and worse advice, forced to go up against their own friends, and offered absolutely no respite. If they survive, they'll realize their dreams and graduate from the world's most elite and secretive college. If they fail, they won't even remember they were there. All the friends they've made, all the skills they've learned will be wiped from their minds in an instant, and two days in, the pressure is already starting to show.
©2003 Atom Books (P)2007 Bolinda Publishers Pty Ltd.

What listeners say about Spy High 5