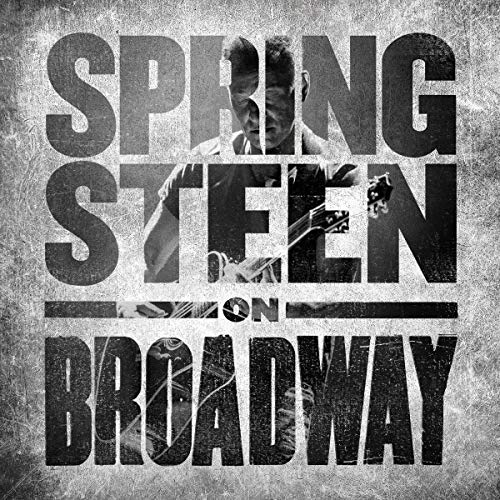 Springsteen on Broadway is the new album of music and stories by Bruce Springsteen and the soundtrack to the Netflix film of the same name. This audiobook is the complete live performance of the show.

Bruce Springsteen's historic sold-out series of performances of his one man show began previews on October 3, 2017 and officially opened October 12, 2017. The show was extended three times after its initial eight-week run and ran on Broadway at The Walter Kerr Theatre through December 15, 2018, bringing the total number of performances to 236.

My only complaint was it was over too quickly and I never saw it live. An interesting insight into the life of an outstanding musician. Well worth a listen

The Storytelling Magic of Springsteen on Broadway

Springsteen on Broadway was one of the most personally touching shows I’ve ever seen. I’ve been a fan of The Boss since 1984 when I was a twelve-year-old girl. Going to twelve concerts prior to his show on broadway set me up for the glory I anticipated. Image may contain: Donna Snyder-Lucas, smiling

Honestly, I never thought I’d get to go, but it worked out for my 21st wedding anniversary: October 11, 2018. I scored one ticket and my beloved (who enjoyed The Boss with me several concerts prior) waited in a NYC pub while I sat still and laughed, sobbed, and super-fanned Bruce in the quietest way possible. My scarf caught six different waves of tears from this rockstar who disrobed his interior heart and soul in front of each of us. Anytime, I’ve seen him perform, I felt like there were times he was speaking directly to me. During this show, he spoke to me the entire time. That’s a transcendence power to touch the listener so intimately and personally.

Bruce pleaded with his audience to understand that he’s a fraud, and what he does is an act, like magic. The funny thing is, we, fans should already know that. We know he’s a man, a rockstar, a band leader, a dad, a husband, a mess up, a perfectly imperfect guy… We understand his roles and we still show up for his role call. He’s a storyteller who has embellished his lyrics with: fact and fiction, humor and drama, romance and heartache, misery and glory, devils and dust, ghosts and God.

Bruce is my storytelling hero. His words move me. His loyalty stuns me. His consistency keeps me. His depressions connects me. His healing energizes me. His love for others and himself includes me. Bruce is an almighty performer, actor, mentor, sinner, savior, singer…. He reveals great losses but shares how he overcomes and keeps going. That’s a universal magic trick from a genuine real deal guy, not a fraud.

He gets it… he knows his place in this world, currently. He has served many with his God given talents and stamina to keep reinventing his storytelling skills. Springsteen on Broadway was basically the musical dramatization of his 2016 autobiography Born to Run. I’ve read and listened to the book numerous times before and after seeing him perform the book, talking, singing, and reflecting on his life in this venue.

The show is now over and currently available on for your viewing and listening pleasure via Audible (best deal), DVD, CD, MP3, and Netflix. For the masses who weren’t able to see Springsteen on Broadway in person, I hope you can put yourself in that Walter Kerr Theater and imagine the power of song, saints, silence, and Springsteen that poured out of him during his confessional production in which he asks for acceptance, love, and forgiveness. He’s a man who reminds us and himself that , “It ain’t no sin to believe you’re alive.”

8 of 8 people found this review helpful

Really enjoyed Bruce telling his life story the way he remembered it! Growing up in a blue collar neighborhood, how he got his first guitar at 7 years old, how he began entertaining people, and his relationship with Clarence! It was a once in a life time relationship. He is a very spiritual man with real, honest feelings about the world and solutions to some of the problems. The USA is blessed to have him living here. A really good person!!!

saw Bruce in 1978. This is a perfect closing chapter, moved beyond words! just what I needed. Just kinda mad I couldn't see it live!

Amazing Storytelling!! An intimate celebration of the decades of treasured memories Bruce's lyrics and music has given us!!

If you grew up in the early to mid 1970s and enjoyed the sounds of the Jersey Shore Bands - then this is a great story that is well told. a 180 from my normal audible content - and trilled I found it and listened. thanks for making it available. I don't think I would have gone to see it live, but it was a great alternative.

great story great music, loved the netflix special and this was nice to relive it while driving to and from work

I’ve seen this on Netflix and now have listened to the Audible version. The stories are so thought provoking and moving.

An Intimate Audience With The Boss

Fans of Bruce Springsteen often feel as if he is speaking directly and solely to them when he talks, and when he sings — and in this Broadway show, he does just that. It is intimate and personal, it’s raw and sacred. It’s Bruce, and it’s all you ever wanted. I will visit with Bruce again, from time to time, and be reminded of just how magical and talented he is — and be grateful.

Bruce Springsteen tells the stories behind his most beloved songs as only he can. Yes, he's a little slower, a little raspier, a little rougher around the edges, but it's an edginess born of experience and unfaltering love. Springsteen on Broadway is a masterful tapestry of yearning and discovery, past and present, determined dreamer to Boss. If you loved the music then, you'll fall in love anew with the annotated versions now.

I’ve listened to this 3 times now. What a story teller! Highly recommend whether you’re a fan or not.

I'm not the biggest Springsteen fan but I like his views and thoughts on life. Bruce describes his early home town life the means behind some of his music and his career. An insightful book on the man and his music and what makes him tick.

Fantastic Performance by the Boss

A very personal concert, listening to this as preparation for Western Stars which I'm seeing later this month. Absolutely worth your time even if you're not a full time Springsteen fan like myself!