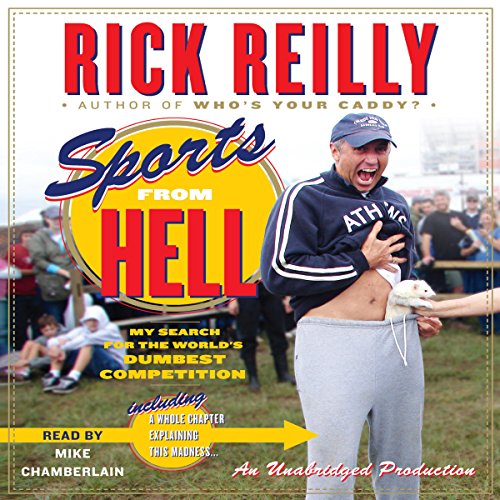 The most popular sports columnist in America puts his life (and dignity) on the line in search of the most absurd sporting event on the planet.

What is the stupidest sport in the world? Not content to pontificate from the sidelines, Rick Reilly set out on a global journeywith stops in Australia, New Zealand, Finland, Denmark, England, and even a maximum security prison at Angola, Louisiana, to discover the answer to this enduring question.

From the physically and mentally taxing sport of chess boxing to the psychological battlefield that is the rock-paper-scissors championship, to the underground world of illegal jart throwing, to several competitions that involve nudity, Reilly, in his valiant quest, subjected himself to both bodily danger and abject humiliation (or, in the case of ferret legging, both).

These fringe sports offer their participants a chance to earn a few bucks and achieve the eternal glory that is winning - even when the victory in question might strike some as pointless, like the ability to sit in an oven-hot sauna for the longest time. It's debatable whether these sports push the body or just human idiocy to the outermost limits, but one thing is for sure: Sports in Hell is laugh-out-loud hilarious and will deliver plenty of unabashed fun.

"[I]f you enjoy - And who doesn't? - reading about other people’s pain, then you are going to love Sports from Hell. It's the wittiest sports book out there. And if you don't agree, you don't know wit from Heinola." (Dave Barry, Amazon.com review)

What listeners say about Sports from Hell

I found this book to be very funny and as a huge sports fan and as a fellow sports journalist I could really relate. A really fun listen and I especially liked the Reilly's take on boring baseball!

nothing serious here, but entertaining

Rick Reilly does a good job of walking us through a dozen or so really stupid activities that meet his definition of "sport." Chess Boxing and the World Sauna championship were amongst my favorites.
Mike Chamberlain provides a terrific narration.