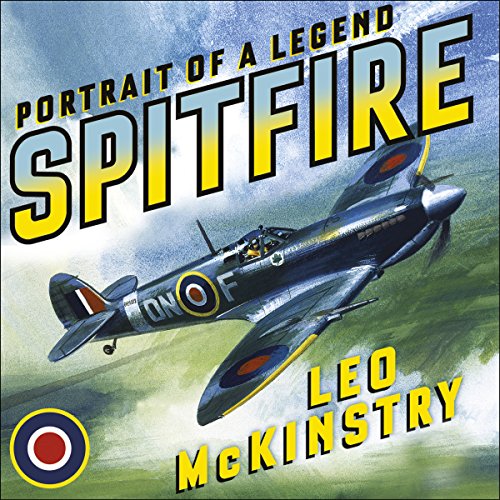 The gripping saga of the plane that carried Britain through the Second World War.

In June 1940, the German army had brought the rest of Europe to its knees. 'Hitler knows that he will have to break us in this island or lose the war. If we can stand up to him, all Europe may be free, and the life of the world will move forward into broad, sunlit uplands,' said Churchill. The future of Europe depended on Britain.

A self-confident Herman Göring thought that it would be only a matter of weeks before his planes had forced Britain to surrender. The courage, resourcefulness and brilliant organisation of the RAF were to prove him wrong. By late September 1940, the RAF had proved invincible, thanks to the Vickers Supermarine Spitfire. It exceeded anything that any other air force possessed. RJ Mitchell, a shy and almost painfully modest engineer, was the genius behind the Spitfire. On the 5th March 1936, following its successful maiden flight, a legend was born.

Prize-winning historian Leo McKinstry's vivid history of the Spitfire brings together a rich cast of characters and firsthand testimonies. It is a tale full of drama and heroism, of glory and tragedy, with the main protagonist the remarkable plane that played a crucial role in saving Britain.

Listen & learn about the legend

A great insight technically and personally of a time where England pulled socks up and created something probably not done since.

Lots of background, context, and obviously well researched, interesting, well paced, and well read, this was a great book!

Fills in the gaps.

I enjoyed this book immensely. It started from scratch, and finished when the Spitfire production ended. It is very detailed and enjoyable, outlining each marks strengths and weaknesses, as well as that if it’s main opposition. It also clarifies many of the misconceptions that previous authors have propagated as did not have access to some of the material released lately.

An amazing book, well read, with just one niggle. As admittedly an everlasting fan of the spitfire since I was 10 it grates that the narrator has consistently mis-read the number for the prototype! It’s K5054.

A good read for all, in a traditionally researched

although mssr Mckinstry performed his usual thorough and well researched history, I did detect a note of revisionism in this later listened to volume in his trilogy. Other than that small quibble, I found the book to be entertaining and nearly 100 % accurate, although his horsepower quotations in particular, are, I believe in particular to American aircraft, off, and slightly misleading. Thunderbolt hp ratings did not approach 2700 hp until later in the war, long after spit mk5 was put into service, and like spit, was also a beneficiary of continuous development throughout deployment. Original p47s were rated at 2,000 hp, and later water injected for war emergency power of, I think, around 2400 hp. Later C series p&w r2800 did produce 2800 hp, according to late Peter Bowers of Wings and airpower magazines. All in all, Mr Mckinstry has greatly added to a long line of research, and I would like to thank him for his labor of love

A fascinating and thoroughly well-researched history. Great listening for anybody with an interest in aviation.

The book doesn’t only just explore the genius of RJ Mitchell, and the humble beginnings of Supermarine. The book traces the family history of the Spitfre from the Schneider Trophy. He was far ahead of his time and robbed from us at too earlier age. But also the guys who flew these amazing machines, the gigantic problems of producing such an advanced machine in big enough numbers for the war effort. A feat that no British Aircraft manufacturer had ever done. And how the Spitfire nearly never happened because of production problems. Beautifully read. An amazing story of shear grittiness, bravery and above all pride. Pride of what this country produced in the face of overwhelming odds.

This book is a wonderfully detailed and yet entertaining of this, the most beautiful and iconic of British planes. From the hard fought birth to the glory above the south coast of England this book is a must for anyone interested in the plane or the Second World War. Brilliantly read also. Thank you R. J. Mitchell for your amazing Spitfire!

Being a complete WW2 aircraft anorak, I'm very familiar with the history and technical background to this famous aircraft, so I was uncertain whether I would learn any more. I'm so glad that I downloaded it as this is an exceptional well researched and written book. Peter Noble also delivers the text very well and maintains the listener's interest. The comparisons between different marks and the adversaries the aeroplane fought against, were very revealing. The stories that are woven into the book also help the listener understand the issues faced by many during the war.

Great history lesson for me. Amazing that it was ever built. Long live the Spitfire. And let us never forget all the sacrifices that they all made, for our Freedom. Makes me very proud to be British.
It shows that this country was a awesome industrial machine. I am certain we will be again.

And let it br known that we will never be dictated to or dominated by anyone ever!

When the truth is more fascinating than the legend

Excellently paced book, fascinating historical insights into the technical and personal stories of failure and triumph behind a WW2 icon, the Spitfire. A great book if you are ever looking for inspiration in overcoming adversity.