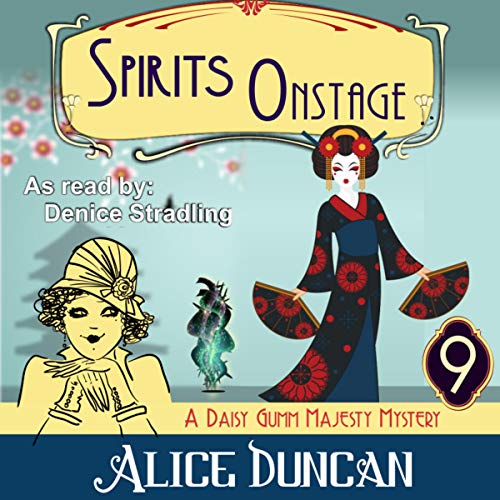 Daisy Gumm Majesty, Pasadena's spiritualist-medium to folks with more money than sense, is talked into playing the role of mean Katisha in her church's production of Gilbert and Sullivan's operetta The Mikado.

As rehearsals progress and Daisy falls into her role, the producer's wife experiences a mysterious decline in health, a cast member claims someone is trying to kill her, and the husband of another cast member is murdered.

Knowing Detective Sam Rotondo has his hands full, Daisy turns her attention to the murder, convinced Gloria Lippincott did her husband in. But no matter how Daisy twists and turns the facts, Gloria's alibi is rock-solid. Then Daisy discovers the Silver Ghost.

What listeners say about Spirits Onstage

This is a wonderful book to listen to ,beautifully performed. engaging characters and a well thought out plot. Definitely worth listening to. 😀