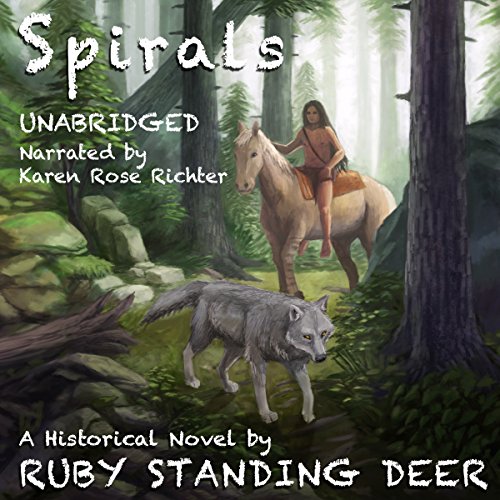 Evolved Publishing brings you another rare glimpse into ancient Native American Indian culture, with Spirals, the much anticipated sequel to the critically acclaimed Circles, by Ruby Standing Deer.

A Holy Man, who lives in both this world and the Spirit world, waits hidden in a cave in the canyons, as a newly made woman runs toward him. She flees her would-be suitor, who wants from her more than she can give. The Holy Man and his constant companions, a colony of mice, accept the woman within the cave. She worries that he may be crazy, but given her fear of the man who desires her, maybe crazy is not so bad. In this sequel to Ruby Standing Deer's first novel, Circles, the main character of Shining Light is now grown and with family. He dreams of the woman and the Holy Man in the canyons, and knows that, after four seasons of calm and peace in the Forest of Trees, he must go to them. He seeks guidance, but the Spirits tell him only that he must rescue these two people. Yet he need not go alone. Ever Shining Light's faithful companion and Wolf Brother, White Paws senses he must follow his Human Brother. Thus, one Human, one Wolf, and their two families set out for the unknown. The adventure exceeds all of Shining Light's expectations, and he learns more about his place in this world than the Holy Peoples of his band could ever teach him.

What listeners say about Spirals

Another learning experience or two hi Ruby Standing Deer. I need a brothers and sisters and how we have learned from them things that we thought we invented but actually way back when the first native American people brought them alive. Read this book it is beautiful.

I just finished reading this book for the second time. It's a wonderful book with so many spiritual lessons. As I have now finished both Circles and Spirals for the second time I will re-read Stones. . I wish you had more books of this genre that I do so enjoy.

Such a Lovely Story!

Narration - Karen Rose Richter - This is a tough one, because she's a fabulous narrator...but, This book has a ton of characters and I could only identify a couple by their voices. I also felt like some of them sounded like children or women, even though they were adults or males. But again, with that said, I thought she was a great storyteller.
Part of the issue may also be with me, in that I have not read the first book in this series.
So...that's my first recommendation. I suppose that it's not necessarily required that you read the first book, but from other reviews I've read, you will have a better understanding of the characters (of which there are many) if you start off with the first.

As for the story? Well, as I said, Karen Rose Richter is an excellent story teller and this is a lovely story. It is filled with charm, a little humor, Native American Lore, some mystery and (did I mention) a large cast of characters and animals!
I really need to go back and get the first book!

Spirals is an esteemed sequel to the audiobook ‘Circles’. I love this story and what it represents. This story not only adds more depth to the characters as they’ve matured, it also introduces several new and integral characters. While I thoroughly enjoyed ‘Circles’, I found even more inspiration from ‘Spirals’. This is a story for all ages and I’m hoping there will be a third audiobook.

This story begins with the young girl Falling Rainbow who goes off for a few days because she doesn’t want to be with the young man Night Hunter who wants to take her as a wife. While she’s gone, the snow turns into a blizzard and she gets lost and slips into a cavern where she meets an elder named One Who Wanders. He plays an important role in the story as a guide or a spirit guide and while each character has their own voice, Wanderer weaves in truths and answers to the questions regarding life and life’s meaning. The true purpose of BEing for ALL Mother Earth’s creatures.

There were several parts of this story that spoke to my heart and the things that I know. I especially liked when Wanderer gave his Great Sky Bead necklace to Shining Light as he explained how he made each bead while walking along the spiral searching for himself. How each stone has special knowledge and in time will show him something as they are the oldest beings on Mother Earth. Wanderer explains to him that he lives both inside and outside the spiral at the same time. Like Wanderer, Shining Light is a young holy man. Shining Light is Feather from the first book ‘Circles’ only many moons have passed and now he is older.

About the author: Ruby Standing Deer is an award-winning author who brings to life the ancient Native American culture. If I could choose an author that I would like to meet, she would be the one I would choose.

About the narrator: Karen Rose Richter is an amazing voice in the audio community. I love her work. She is a true gem and gets it right every time. I can’t wait to listen to more from her.

not my cup a tea kinda book. found it hard to follow. this book was a few book. some may like it

A beautiful story that teaches us so much about human nature and also about the history of a great indiginous people who were treated so badly in the name of greed ignorance, power and arrogance. Time the Americans descended from Immigrants apologised to these beautiful people and respectors of our planet. They can teach us so much. Wonderfully written and also read.