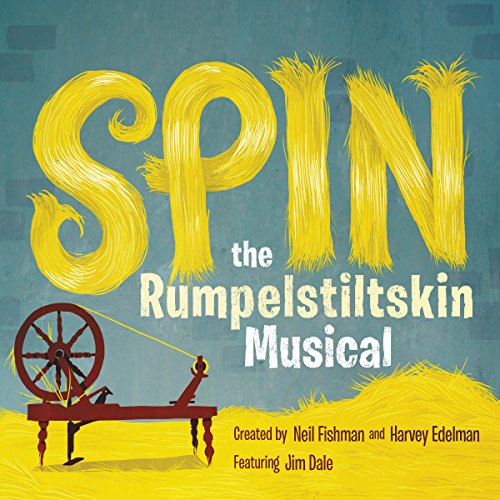 Spin - The Rumpelstiltskin Musical: A witty musical reimagining of Grimm’s fairy tale Rumpelstiltskin, created by musical theater veterans, narrated by Jim Dale, and featuring a cast of Broadway musical stars. The story takes place in a Nice Little Kingdom, and ignites when a foolish miller brags that his daughter, Jane, can spin straw into gold. Since she cannot perform such a miracle, Jane desperately enlists the powers of a magical being…Rumpelstiltskin…in exchange for a promise with dire consequences. A fun, fractured fairy tale for the entire family.

What listeners say about Spin

This is the audio book I have been waiting for! I have never purchased an audio book (I believe no two people read a book the same), but I decided to try it for a musical. As a child I grew up listening to Disney on LPs (yes I just dated myself) and Spin brought me back to my childhood! Thoroughly enjoyed it and look forward to the next one!

Classic fairytale with a musical twist - amazing cast and narration!

I absolutely LOVED this reimagining of the Rumpelstiltskin story in a musical format! Jim Dale's narration is, as always, incredible. What makes it even better, though, is the fantastic cast that plays Rump, the King, Jane, and all the other characters in this updated fairytale. There's so much to love about this audiobook!

This audiobook is a treasure. All the readers gave an awesome performance. This is an audiobook that the whole family can enjoy!

When you start out with Jim Dale's beautiful voice....you can't go wrong. I absolutely fell in love with this full cast audio production. I loved the music, adored the story and the appreciated the witty humor. It is perfect for running the kids around in carpool or for a brisk walk (warning...you will begin singing...my husband did). I will recommend this to all my family and friends.

This is an adorable musical/fairy tale. Predictable for an adult, very appropriate for kids. Needless to say, with an all-star cast like this, the performance was flawless. There were lots of sound effects that enhanced the performance and made me laugh. Listened to it in one sitting. Normally, I'm not much of a fan of musicals, but the storyline carried me through some of the repetitious musical themes. Recommend!

love the characters and the singing is so fun. really good way to do an audiobook.

Fun for the whole family. This would be great highway listening. The performances were great all round.

A Treat for Your Imagination!

A well written, well scored show with fine performances SPIN puts a contemporary take on a fairy tale classic. As the show progressed I could really picture the set, the costumes and the characters. Bravo!

I gave this a chance because I love Jim Dale and I was not disappointed. It was really well done and a fun way to listen to the tale of Rumpelstiltskin.

This was such a wonderful retelling of the Rumpelstiltskin story :) Has it’s own little satirical tid bits and I just loved it.

That music is going to be stuck in my head for months...