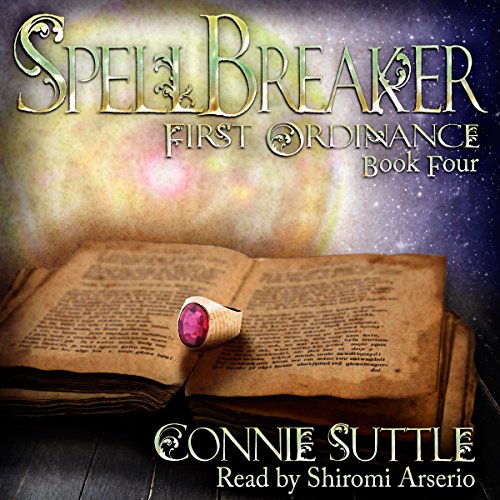 Wylend Arden, Fifth-level warlock and King of Karathia for more than 20,000 years, had quite a story to tell.

"It began like this," he said, his smile slightly crooked as he lifted his cup of wine to me. "I had an older brother, born to one of my father's legitimate mates. His name was Wellend and he was heir to the Karathian throne. On his 16th birthday, my father gifted him with the Heir's Ring, as was proper."

After thousands of years, Wylend's niece and nephew are making a bid for the Karathian throne. All they need, it seems, is a book and a ring to prove their inheritance.

It matters not to Deris and Daris Arden whom they murder or which worlds they destroy in their quest to wrestle the throne from seemingly legitimate heirs. If they conquer the Karathian King and take the throne, their greed will demand that the Alliances be next.

Unless their spell can be broken.

What listeners say about SpellBreaker

So this 4th in the series introduced Zaria who was really instrumental in the plot through tout the book. Quinn is still at the mercy of the orb and her mates must deal with her trials as does Zaria in a different way. Now there are generations of Lisa’s family and mates involved and it feels like there is more to come with the cliffhanger at the end of the book. I admit I had to reread several times due to the constant, time changes and travel. I love the continuation of space crafts into the story. Now, onto the last in this series.

I kept getting the I's confused.

listen to the audible version was maddening. I kept getting the I's confused. There were so many shifts in who was talking and each one was an I. The story also remains confusing. I'm still not sure how we got to drift in outer space. I may have to read again and read along with the audible version.

I loved this book just as I loved all the books in this series. They are very well written storylines and keep your attention throughout. Connie did very well

love the story line but to many names are sexully unclear and the narrator makes no voice differentiation between sexes or even characters.