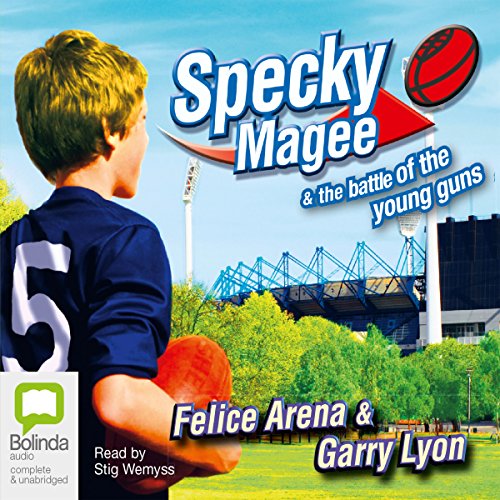 Specky Magee and the Battle of the Young Guns

Specky Magee and the Battle of the Young Guns

Specky Magee and the Battle of the Young Guns is part of the extremely popular Specky Magee Australian children’s book series.

In this installment, performed by good old dependable and jovial Australian voice artist Stig Wemyss, we follow Specky, an aspiring Aussie Rules footy champion and otherwise normal teenager - with all the regular triumphs and tribulations that go along with it - as he continues his quixotic athletic quest while barely managing to survive the daily rigors of both school and home.

Here is an exciting storyline and fantastic football action - an audiobook especially good for boys and reluctant readers.

As the Victorian team battle it out against the other states for a chance to play on the hallowed MCG turf, Specky has a fight on his hands just to be allowed to play with his beloved Booyong Lions. And when his long-lost grandpa comes to visit, it's all-out war at home as well. Will he have to choose between representing his state, and coming through for his mates? Can he find out what's going on between his dad and his grandpa before it's too late? And who is the mysterious man who has been keeping an eye on Specky's game? Specky's loyalty to his friends, his team, and to AFL will be tested like never before.

Eah is was okay I guess meh