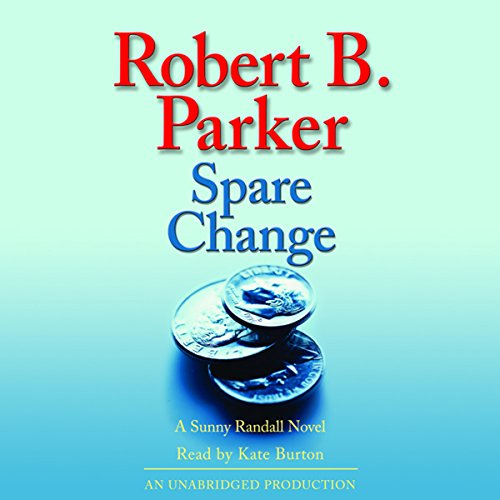 By: Robert B. Parker
Narrated by: Kate Burton

Hi Phil,
You miss me? I got bored, so I thought I'd reestablish our relationship. Give us both something to do in our later years. Stay tuned.
-Spare Change

When a serial murderer dubbed "The Spare Change Killer" by the Boston press surfaces after three decades in hiding, the police immediately seek out the cop, now retired, who headed the original task force: Phil Randall. As a sharp-eyed investigator and a doting parent, Phil calls on his daughter, Sunny, to help catch the criminal who eluded him so many years before.

When the killer strikes a second and third time, the murders take a macabre turn, as the victims each eerily resemble Sunny. While her father pressures her to drop the case, Sunny's need to create a trap to nab her killer grows. In a compelling game of cat-and-mouse, Sunny uses all her skills to draw out her prey, realizing too late that she's setting herself up to become the next victim.

What listeners say about Spare Change

Every dialog ends with "he said" or "she said"
"Tedious," he said.
"Annoying," she said.
"Monotonous," they said.
"Distracting," I said.

I enjoy reading Robert B. Parker books, but when they're read to me as audiobooks they become really annoying. It's one "he said," "she said," "I said" after another -- I've concluded that every fifth word, or so, must be SAID. After listening to several Parker audiobooks I'm convinced the printed books would be half as thick if the SAIDs were left out. Here's where a little abridgement would be welcome -- just leave out 50%-60% of the SAIDs, and let the reader (with voice changes) show who's doing the saying.

This would probably be a good book, but this narrator ruined it for me. You could predict the inflections of her voice to the point of it being a drone. The story line was really good but I couldn't pay attention to the story because the reader was driving me nuts with her voice. She put all her inflection at the end of each sentence and did they all have to end with the word "said" in such a flat monotone? If you want this one, get it in paperback and read it yourself. I've never had to give a bad rating on here, but I think you will be very distracted by the narrator's voice and lack of motivation to enjoy this book.

Too many I said's....! takes away from the story

Listening to all the "I said & he Said is just as annoying as reading all those I's and he's in the book. It takes away from what could be a great story. I rate this book as middle of the road because of them.

It was hard to keep up with. I had to go back several times. Otherwise it was ok

I have not read any of Parker's books before. I had only seen a few of the tv movies made from his books and I thought I would give him a try. I like his plots, but can't he figure out how to write dialogue without those incessant "saids" ? It is truly annoying even in the written form. Whatever "style" this is, I don't like it Kate Burton does a great job narrating other books, but I couldn't finish this one.

This was sooooo boring. I had read an article in the Boston Globe about the author and thought I'd try it. I feel it was a waste of my money. Firstly, the story had more to do with the main characters family, friends and dog (which, by teh way, was quite boring)than with a serial killer. Secondly,the Boston accent was horrible. It sounded like when William Devane tries to do a Boston accent. As bad as it was, I couldn't help but be bothered by the fact that the main female character's mother, father, sister, boyfriend, friends, detectives, virtually every character in the character in the gook all had the awful accent, but somehow she didn't. Did she grow up somewhere else? Really, really annoyed me. I would say about 1 hour of the book actually dealt with the serial killer, and that wasn't even that exciting. If you decide to get this, it's okay to fast forward to the last paragraph if you get bored. That's really all you need to listen to. I will definitely take all books by this author off my Wish List.