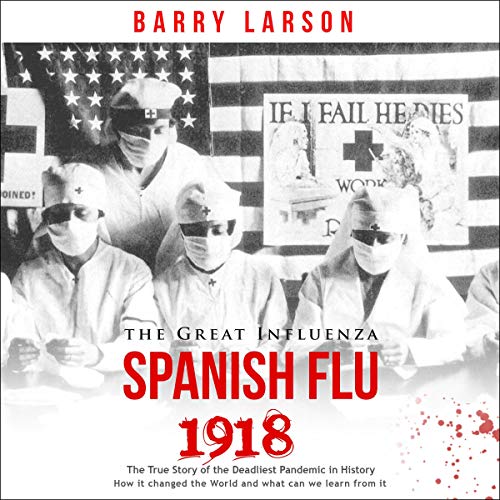 The Spanish Flu was one of the deadliest viral outbreaks in history. It erupted just as World War I was coming to an end in 1918. The virus wreaked havoc across the entire world and ravaged as many 50 million lives by conservative estimates. While we do not know about the true epicenter of the fatal disease, it spread globally with soldiers as carriers.

This is the gut-wrenching story of tragedy on a colossal scale but also of hope and brotherhood in a time of crisis. While the sad event is etched on the hearts of those who suffered from it, those who lived to tell about it also shared the lessons learned.

What you’ll read is the first-hand account of abysmal horror that the situation unleashed and the state of chaos that ensued for years. How entire global healthcare systems were mobilized and dedicated to fighting the ugly beast.

Here’s a preview of this special audiobook, and what else you’ll discover:

Many of the lessons that had been learned in the wake of the devastation were applied in the current pandemic spread. We need to also be prepared should a similar situation arise, again, in the future.

This audiobook is a true eye-opener and will help you look incredibly closely at the Spanish Flu and how the ugly monster was brought to rest and the great human cost that we endured.

So, buy this audiobook today.

"Spanish Flu through the lens of one who lived through it and the indispensable lessons learned as a result." (Medical History Journal)

What listeners say about Spanish Flu 1918: The Great Inlfuenza

Well worth the time to read, and you’ll spend more

This book succeeds in dramatically describing the unfolding of what is considered the worst pandemic in human history. What is chilling for anyone reading this book now, during the present pandemic , is the many similar issues we and they faced.

Every One Should listen this book

Mr.Larson offers insight, reflection, American medical history, politics, and other facts that reveal, in frightening detail, the deadliest plague to hit mankind in modern global history in a no-holds-barred, devastatingly accurate narrative that is both terrifying and incredibly informative. Don't know the evolution of medical science and research in America? You'll learn it here

Reading this history, I felt the helplessness the victims and survivors must have felt. The fact that so tiny a creature, if you will, could cause such mass casualties in such a short amount of time should be a wakeup call. More frightening still is the fact that such a world changing event seems to have been forgotten about. There is thought that my great-grandmother died of the Spanish Flu even as late as 1920 which eventually caused the unravelling of her family. I was told about the pandemic from the survivors of my family and the facts of this book and their story match.

Pandemic’s History is a great book

If anyone thought a book about virology, epidemics and human pandemics would be hard work and boring, they would be wrong. Barry's book is gripping, moving and exciting. And this easy-to-read book clearly explains the complex dynamics between viruses, insects, birds, mammals and humans. This is first book I have found that defines the replication, random mutation and transmission of viruses in a most straightforward manner. I highly recommend it, as it is high time we learn from the past pandemics to help ourselves in the current pandemic.

If you want to understand what happened during the 1918 influenza pandemic ( the Spanish Flu pandemic.) then I strongly recommend reading this book. This book is very well researched and well written

There are so many things about this book to recomm

There are so many things about this book to recommend, but what impressed me the most was the exhaustive contextualization of how our nation went from being in the dark ages of medicine to a world-class leader in research just before the epidemic struck.

A Book that should be read at our times.

Mr.Larson turns medicalese into understandable English, describes the flu in uncompromising detail, and reflects on its impact and aftermath in thought-provoking discourse. And he also warns that -- for all our medical advances -- it could happen again. Everyone should read this book..

This book deserves to be top-seller

A frightening overview of our ancient alien masters - microbes and pathogens that can fell whole civilisations. Two hundred years on from a massive global cholera pandemic (one of the most interesting parts of a fascinating book), and one-hundred years on from the Great Influenza Epidemic, the world may be ripe for a new global mass dying. This book gave me a scare about the atrocities that came in the past can be repeated in the future. Reading this book and getting the information provided is now crucial than ever.

A great read. As an Irishman I was fascinated to learn about the origins of our 18th century famine as well as our treatment in the USA during Cholera outbreaks. Also the Corporate responsibility for outbreaks in New York attributable to the likes of JP Morgan was another great piece of info. A very relevant book in 2020. I recommend it to anyone looking for a great read of a fascinating history on the pandemic.

Pandemic’s History is a great book to get into to the details of emerging viruses from any background. Barry manages to weave a complex subject into a flowing narrative, giving scientific detail where necessary and supplying lots of case studies and stories to help lighten the load. You cannot but be impressed by the amount of research, interviews and fieldwork he has completed over many years to put into this book. This is not a textbook, so if you are looking for academic detail look elsewhere, however I come from a virology background and found this an engaging and enjoyable general interest read.

A book whose time has come. This should be listen by everyone, anyone, trying to understand the current covid-19 pandemic.

As an epidemiologist, I already knew the Spanish flu was disastrous. Spinney brings the epidemic out of the pure public health realm and into the personal. I am recommending this to all of my friends with interest in either history or disease.

Easy to listen scientific lens of the 1918 Pandemic. Trajically, it is our current reality and we still have no answers.

This is an incredible reflection of what’s happening today and what we should have learned from the 1918 flu pandemic.

History doesn't but it rhymes.

An incredible book on the Spanish Flu which serves as a learning experience in these critical times of the COVID-19 Pandemia. Listen this book, you will see how history doesn't repeat .

This is an excellent, detailed account of the Pandemic of 1918-20 that personalizes the experience of those who suffered from contracting the "Spanish flu".

Very well spoken and researched but also very listenable. It's hard sometimes to strike the balance between scholarly and interesting, but this book does it. I learned and I was entertained.

Everyone should prepare themselves with this insightful history which sheds so much light on why we are where we are in this current pandemic.

Explained how the virulent 1918 flu epidemic became widespread, around the world and even into rural areas where my Physcian grandfather died caring for infected patients.

What I never Knew!

Forthright and frank, I never realized how dangerous the flu can be. If I got sick, I remember saying, "It's just the flu." Well, never again will I say that. The flu is real and dangerous and is definitely a killer. I will always get my flu vaccine every year.