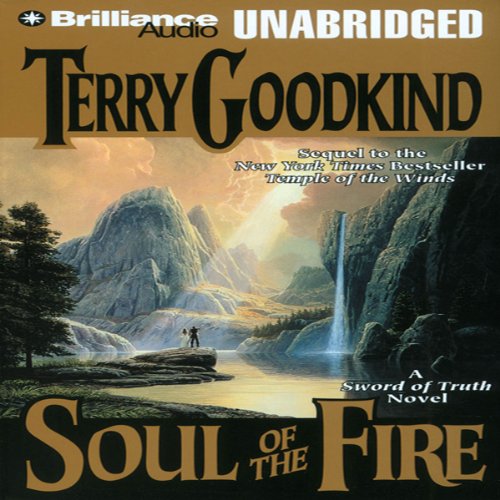 Terry Goodkind returns to the epic Sword of Truth saga in a tale of sweeping fantasy adventure bound to enthrall his growing legion of fans. In Temple of the Winds, the New York Times best selling fourth novel in the series, the Seeker of Truth Richard Rahl and Mother Confessor Kahlan Amnell risked their lives and souls to free the land of D'Hara from the scourge of a magical plague. But in doing so they accidentally unleashed the Chimes, a magic whose threat will reach far beyond D'Hara.

Now it has become terrifyingly clear that the Chimes have the potential to bring down all that Richard and Kahlan have worked to protect, and even the power of the Sword of Truth may not be enough to stem the tide of their unleashed magical force. But if the Chimes cannot be stopped, first they will ravage Richard and Kahlan, then all of D'Hara, and then the entire world.

I was not a fan of the cadence of the narrator. However, the voice acting was fantastic. Also, its Terry Goodkind, so A+ for the story.

There's far too much character development on a few characters in the middle, was bored through most of that as it's not even necessary.

Well read, but one of the weaker books in the series, doesn't really progress the story at all.

I love this series so much

the end is so hard to read.i feel like I'm in the books when I read them

do yourself a favour and listen

best fantasy series ever. listen to them every few years now and just as good as the first time

First of all, I can't wait for this book to end so I can get to the next one, hoping it will pick up the pace a bit. Secondly, I'd like to know who picks the readers. I think I may have gotten spoiled with Sam Tsoutsouvas in book 1. He did such a fabulous job, everyone else seems mediocre at best.
And it's not fair to call Dick Hill mediocre. Or any of the other readers.
But misspronouncing Kahlan's name is inexcusable.
And Zed, whom Tsoutsouvas portrays as a powerful wizard, later comes across like a little old gnome.
Come on Terry, you copied Robert Jordan in some ways (well, more than some. I keep expecting that at some point they'l refer to the sisters of the light as Ais Sedai).
So, why not copy Jordan and stick to using the same narrator(s) through out the series?
I really couldn't care less how Kahlan's name is pronounced. As long as it doesn't change depending on who is reading.
I do plan on getting through the entire series. Even suffering through book 5. (I am half way through.)
And the TV series? What a joke.

A marked decline in quality

Mr. Goodkind is an imaginative author and the overall series weaves a compelling story. But this book, in particular, showcased some of his shortcomings. While he has always been miserly in his treatment of the disposition of secondary characters he dispatched them with even more rapidity and abruptness in this book. He also had the least impressive end game in this book compared to the previous 4. Like an earlier critique, I was left with the impression that he had come up against a deadline and had to finish the book quickly rather then well. I'm already into the next book and it is better writing but I hope that as he matures as an author he will give more thought and time to the ends of his books.
Unfortunately, you can't really skip this book without losing track of several story arcs so you'll have to suffer through it as I but you have my empathy.
Press on fellow readers, the overall storylines are good and your disappointment will pass.

Did the publisher have a word quota or something? The story is spoiled by all the "describing of things." There were several instances where the words went on and on, incessantly describing nonessential blah. The story was forgotten many times before finally moving forward. Very disappointing.

Not his best not his worst

As with most audiobooks a lot of the listener's experience comes down to the reader of the audiobook. The story was so so in the beginning and got better towards the end but ended pretty abruptly. But the reader of this novel is 10x better than the previous one. I'm glad I didn't stop at the last book and was able to make my way thru this one. I've read pretty good reviews of the book to come.

I love all these books in the sword of truth series, I am re reading then for the...I don't know 4th time because I have to get ready for Shroud of Eternity in Jan 18.

Like many other people are saying, the narrating in this book is frustrating. However I enjoy the book, I've read them all and now listened most of them once already and now doing it again with the new narrators.

I'm glad he only reads 2 books.

To me, this book wasn't as good as the first four. It seemed to go off on a tangent about other things. I can understand to a point why you would need to know the background information, but it seemed to drag on at times.

I thought the first 2/3 of this book did a good job of developing new characters and setting the stage for the political and magical forces that Richard had to overcome. However I found that the climax to the plot and the wrap up of the fates of the characters in the conclusion was sorely lacking. I seriously thought that I had missed downloading the last section of the book. If not for the "We hope you have enjoyed our presentation..." I wouldn't have even known that book was over. Fates of some of the secondary characters are left in the air, the intent of what the primary characters plan to do after the completion of their struggle is vague at best. Richard never explains to any of his companions how he figured out the way to overcome his adversaries. The fates of some of the main antagonists get summed up by a single sentence. It is hard to express all my issues with the book without giving too much away, but if I had to sum up my feelings on this novel in a single word, it would be "Disappointing." I will probably give the 6th book a chance, but I will take a break from this series for a while to help get the sour taste out of my mouth left behind by this book.

tried but can't take the vibe

I'm not into writers that are so into writing repeated tape scenes and killing every *small child* in the book.
I wanted to like this series and tried hard enough to ignore it through the first four books thinking he'd mature beyond it... instead it seems to have gotten more frequent and less important to the plot. if wanton child murder/mutilation and rampant detailed rape scenes piled together is your thing- here it is. I'll get my suspense and fantasy genre somewhere else

something a little different

terry goodkind did an excellent job of creating a new society, introducing and humanizing several new characters and telling a new story.

honestly, i'm glad to have so much time to get to 'know' another culture. the constant arguing between richard an kahlan over who is 'right' is starting to get old.

The narrator was better than the last book and the story keeps you guessing! Good book!

Yes, a must read/listen from start to finish,

What was one of the most memorable moments of Soul of the Fire?

The characters betrayal, the suspense kept on the edge of your seat

I liked the story, but the first two books are the best. It was a bit slow to get going and there were too many back references to previous books and earlier parts of the story. I liked it enough though to get the next book, so it's worth listening to as its imaginative and there are plenty of great characters in the book. The narrator is alright too, not the best but he doesn't ruin the book by any means. The price is fair too.

These books get more and more gripping. Considering that the biggest strength of our main character so far has been his magic (and his character of course but magic is his big weapon) that strength is taken away from him. Not only that but he also ventures into a new land with very strange customs and has to convince them to join with his empire.

This book had me on the edge of my seat, the narrator was really good and all the names were pronounced right. Nothing not to like in my opinion.

i am up to the 5th book in the sword of truth series , absolutely brilliant reading(audible). the narator has an exceptional voice and makes the listening exciting, able to change his voice as required, to the different characters in the book .

I have read these books in hard copy over and over, now I am enjoying listening to them through audiobooks thank you for a fantastic series of books.

I really enjoyed the twists and turns the story took in this book. The introduction of the Anders with their history, culture scheming and everyday lives was enthralling.

Book starts at chapter 60. Its boring as hell but last 10 chapters make up for that. Narrator's performance is great. Would only recommend if you're a fan of the series...

A total let down

I was quite a bit deflated. I felt like I was watching a soap opera that went on and on. It seemed as if someone else had written it with him. To me it was as if words were being written just to fill a word count for an exam essay. The only light in the whole book was the last 10 chapters. It was as if that was the only part that Terry Goodkind had written.