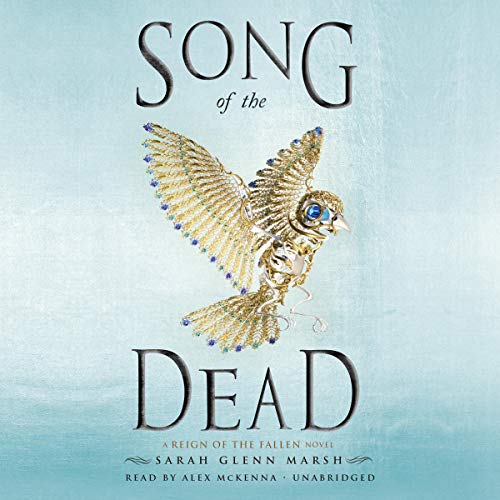 Song of the Dead

The dead must stay buried.

Karthia is nothing like it used to be. The kingdom's borders are open for the first time in nearly 300 years, and raising the dead has been outlawed. Odessa is determined to explore the world beyond Karthia's waters, hoping to heal a heart broken in more ways than she can count. But with Meredy joining the ocean voyage, vanquishing her sorrow will be a difficult task.

Despite the daily reminder of the history they share, Odessa and Meredy are fascinated when their journey takes them to a land where the dead rule the night and dragons roam the streets. Odessa can't help being mesmerized by the new magic - and by the girl at her side. But just as she and Meredy are beginning to explore the new world, a terrifying development in Karthia summons them home at once

Growing political unrest on top of threats from foreign invaders means Odessa and Meredy are thrust back into the lives they tried to leave behind while specters from their past haunt their tenuous relationship. Gathering a force big enough to ward off enemies seems impossible, until one of Queen Valoria's mages creates a weapon that could make them invincible. As danger continues to mount inside the palace, Odessa fears that without the Dead, even the greatest invention won't be enough to save them.

In this enthralling, heartrending sequel to Reign of the Fallen, Odessa faces the fight of her life as the boundaries between the dead and the living are challenged in a way more gruesome than ever before.

"Sarah Glenn Marsh vividly blurs the lines between hope and fear, love and hate, right and wrong as she explores a world where death doesn't have to be the end." (Beth Revis, New York Times best-selling author of Give the Dark my Love)

"Mesmerizing. Sarah's writing is as magical as the world she has created." (Alexandra Christo, author of To Kill a Kingdom)

What listeners say about Song of the Dead

A much stronger sequel.

Marsh hits a good pace with Song of the Dead, with a good amount of action and emotional investment. It feels more geared to the young adult reader.