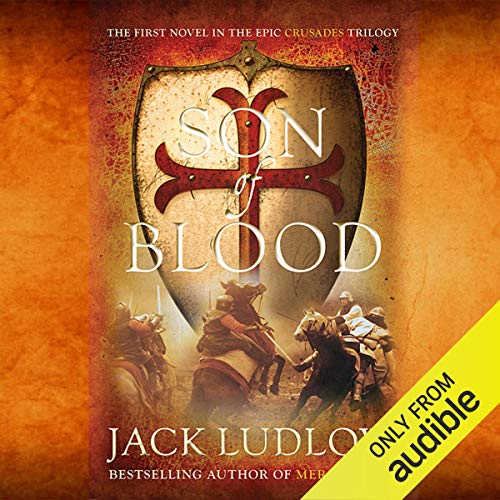 No fighting man can go into the battle thinking of death, for to do so is to risk bringing on that very fate.

Twelth Century, Italy. The domination of the Normans, the most feared warriors in Christendom, is causing trouble. At their head is the feared Robert de Hauteville, the 'Guiscard', who has colonised much of Italy and now commands the triple Dukedom of the extended Norman family, but Robert has made many enemies, including the ever-powerful papacy in Rome. The newly elected Pope Gregory excercises his vendetta against the Normans by encouraging them to sail to Byzantium and fight the Turks. But first he must deal with the Guiscard.

As Robert successfully suppresses a Lombard revolt, punishing the traitors with unrestrained brutality, his first-born, Bohemund, now 17 and blessed with the strength, height, and military prowess of his father, has come to fight in his army. Already recognised as a formidable warrior, Bohemund seeks to assert his natural right as the heir of Robert's dukedom - but this is not without difficultly and conflict as Robert's second son, Borsa, is now legally entitled to inherit. A battle between the sons is inevitable, and loyalties and blood ties will count for nothing.

"Exciting and unpredictable." ( The Bookbag)
"Builds up from pure adventure with excitement and daring all the way." ( Historical Novels Review)

What listeners say about Son of Blood

What would have made Son of Blood better?

This book was more history lesson, less story and as such, was difficult to follow. There was no character development as there were simply too many characters. So, to be better, I feel the book should have focused on a few main characters and developed the story line of this piece of history through them.

Would you listen to another book narrated by Jonathan Keeble?

I felt that the narrator was very good; had he a better story to work with, he would have been great. So yes, I would listen to him again.

As an historical work, it presented a side of the crusades that is not normally discussed; that was interesting.

I've never stopped listening to a book before, but the thought of 4 more hours was daunting...two more books in the series, inconceivable.

Listened to this entire book, kept waiting for it to take off. I found the plot difficult to follow, with lots of characters the reader really does not get to know very well. Action adventure was minimized and historical detail emphasized to the point of boredom. When one is used to the likes of B.Cornwell or Angus McDonald, this book is a bit of a disappointment. Narrator did well with it.

I love these kinds of books and it held me until the middle but then the story jumped, seemed abrupt, and ceased to make sense.

If your a fan of historical fiction, and of course, you also like action and adventure, then you have could not make a better choice than this series

The fact that there is a great deal written about the Norman Conquest of England, but little about the Normans as hired soliders in Italy. The Normans, who ancestors were vikings, were so successul in assimilating into the culture they eventually settled in, is in my opinion a subject of historical fasination that I believe would make a few great movies.


What does Jonathan Keeble bring to the story that you wouldn’t experience if you just read the book?

I normally love to read a book, but due to my travel habits for work, I have to listen to book tapes. Mr. Keeble is able to make the read enjoyable and never boring.

It did put a smile on my face,

Well worth the price of admission

the story flowed and you can immerse yourself in the narration. Jonathan Keebler is great

It's so dry and 1.5 hours into it, it's just been a dull descriptions of relations - who knows - maybe it's relevant for later, but I'm zoning out, and as there is nothing in the writing style, the narration or the storyline that grabs my attention. I'm giving up.

To much historical background and not enough of the actual story, became extremly bored with overall book. If it hadnt been for Jonathan Keeble telling the story I would have given up a lot sooner.

Found the book and performance irritating. I have never ceased listening to a book before, but there had to be a first and this was it.
Not sure if it was the time period or style of writing or the performance- just found it annoying and had to stop listening

What would have made Son of Blood better?

Would you ever listen to anything by Jack Ludlow again?

do not think so