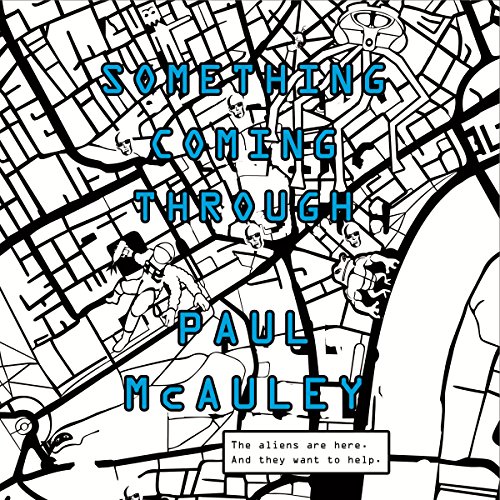 The aliens are here. And they want to help.

The extraordinary new project from one of the country's most acclaimed and consistently brilliant SF novelists of the last 30 years.

The Jackaroo have given humanity 15 worlds and the means to reach them. They're a chance to start over, but they're also littered with ruins and artifacts left by the Jackaroos' previous clients. Miracles that could reverse the damage caused by war, climate change, and rising sea levels. Nightmares that could forever alter humanity - or even destroy it.

Chloe Millar works in London, mapping changes caused by imported scraps of alien technology. When she stumbles across a pair of orphaned kids possessed by an ancient ghost, she must decide whether to help them or to hand them over to the authorities. Authorities who believe that their visions point towards a new kind of danger.

And on one of the Jackaroos' gift-worlds, the murder of a man who has just arrived from Earth leads policeman Vic Gayle to a war between rival gangs over possession of a remote excavation site.

Something is coming through. Something linked to the visions of Chloe's orphans and Vic Gayle's murder investigation. Something that will challenge the limits of the Jackaroos' benevolence....

What listeners say about Something Coming Through

An interesting book. I've been trying to get into the scifi genre for a while but struggling, this book looks to have finally broken the deadlock being believable as-is without needing disbeliefs to be suspended. I've enjoyed lots of detective/mystery books so this also helped ne to stay engaged. Looking forward to the next book.

When the story gets going, it's great...

After encountering some of McAuley's Jackaroo short stories , jumping into the novel length 'Something Coming Through' was an exciting prospect. McAuley's world building is superb and the broad brush strokes of 15 alien start systems gifted to humanity by ambiguously motivated alien benefactors, with each planet an exotic and mysterious puzzle of remnant technologies and frontier human cities and towns, serves as a tantalising backdrop. What will humanity find out there? What do the Jackaroo want? And what of the story collecting aliens the !Cha? Yeah, well not so fast.

Before we get to any of that, McAuley's book tracks two connected investigations, one on Earth, the other on Mangala, with an assorted cast of criminal stereotypes [all seemingly from the East End] and taciturn cops, each with an interest in getting their hands on alien tech. I'm not a fan of detective fiction so this may well not have been a good choice, but the really frustrating part of the story is how so much time is spent on characters talking to each other about things that have already happened. The exotic future stuff fades away for long stretches of the story as the two investigations, one happening just head of the other, plod their way through some pretty boring stretches of narrative, things livened up with the occasional gun fight, or the promise of a revelation.

Happily, the book picks up in the last third and the action shifts into the present and the two threads of narrative meet up. The last part on Mangala, with its odd fauna and evocatively described landscapes, is the stuff I signed up for. When the story gets going, it's great, until then, your enjoyment will depend on how much you like British cop dramas. That said, I am going on to the next book in the series, Into Everywhere...

By the way, Rosie Jones is a good narrator with a firm understanding of regional and national accents, and the 'British' take on telling the story works well. On the downside, Jones has a thing for acting the lines of dialogue making some of the male characters sound more comical than they'd seem on the page. Also, and this is a personal thing, Jones also likes to ACT the narration - the non character prose that's telling the story. For me, I'd prefer that delivery to be delivered perfectly straight, and then give the emphasis to the character voices. A small quibble to an otherwise enjoyable performance.

Great tale, well told with people to care about and wonders to marvel at. Highly recommended.

A police procedural set in a strange future

I enjoyed it up to a point, then it seemed to drone on and on. The SF concepts were fun, if a bit unexplored. They weren't really the point of the story. Something about the pacing was off, because it didn't seem to flow very well, but overall it was a decent listen.

I do not recommend this book. There are plenty of ideas here that ought to make for interesting reading, but instead they just come across as boring. The author does not have the imagination to see things through, and so the book reads like a low budget TV series; the alien worlds look just like Earth, the aliens look just like humans, the future looks just like the present. Except there's no budget to save, no excuse for this relentlessly humdrum future. We're told that civilization stood on the brink of total collapse, yet nothing much seems to have changed. Add to that a mediocre mystery plot and you have a very dull book. Most insulting of all, rather than reaching any resolution or answering the big questions it poses, it just baits the sequel.

The reader is decent, but often sounds like she's reading a children's novel, robbing the book of any seriousness it might have possessed.