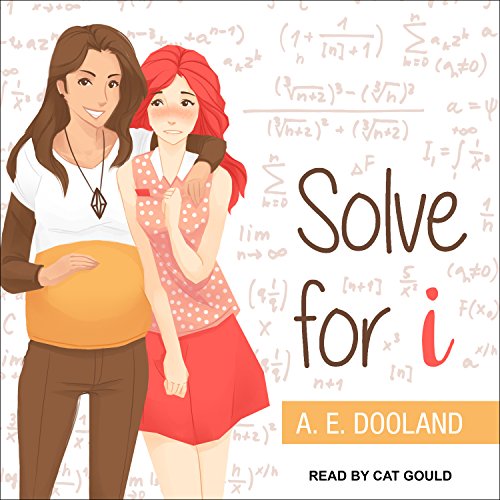 By: A. E. Dooland
Narrated by: Cat Gould
Free with 30-day trial

Math whiz Gemma Rowe has found the one problem her math can't solve: She's fallen for her female and very heterosexual best friend.

Gemma Rowe is a shy math nerd from Sydney who, despite having an affinity for probability and logic, only just worked out at 28 that she's not actually straight. Not only is she not straight, but she's developed feelings for her best friend, Sarah.

Sarah and Gemma go way back - since they met at university, they've been completely inseparable. They've traveled together, landed jobs at the same company, and shared each other's triumphs and sorrows. There was even that one memorable night when Sarah, completely drunk, told Gemma she couldn't live without her. To Gemma, romance seems like the natural progression.

There's just one teensy little problem with this whole equation: Sarah is straight.

Gemma knows the logical thing to do is to get over Sarah. She wants to be in her own happy relationship and not caught up on her straight best friend. But how is she supposed to get over Sarah when, despite all those advanced problem-solving skills, she can't even figure out who she's attracted to anymore?

What listeners say about Solve for i

Feel-good, funny and full of heart-warming friendships, this is an immensely enjoyable coming out story with a satisfying and romantic ending. Expect to laugh out loud and fall in love with the diverse cast of characters as they struggle through some hilarious situations.

At first I did find this book difficult to get into because even though I am Australian myself I am not used to hearing an Australian accent in the audiobooks I listen to and Cat Gould has a very ocker Australian accent. However once I gave the novel the chance I found the characters were all really likeable and the story itself is really entertaining. It’s a very enjoyable tale and I very much recommend this book. 🐨

Almost hits too close to home

Loved it all the way through! And finally hearing Gemma in all her awkward glory and panic spoken out loud makes it just as amazing as when I first read the book almost a year ago

This is a beautiful story about love, friendship and happiness, mainly in the sense of what those things actually mean. Gemma is so obsessed with statistics and probability that she lives her life feeling miserable about not being like everybody else.

I think her love for Sarah was real, but sort of idealised, after all Sarah is straight and was in a happy relationship. I admit that at the beginning I was kinda hoping they would end up together, but after a couple of chapters I did a 180 and was now afraid they would, because it would ruin the story and it's potential message.

Fortunately that wasn't the case and Gemma found her happiness, because even after Sarah knew everything she was still her friend, so Gemma could leave her impossible dream behind and go on with her life. I really liked this story, a part of me would've liked to see more of Sarah and Mikey, but even so I still think the ending was perfect, a perfect 10/10.

I had previously read this book about a year ago and loved it (and the two other books in the series). And, although the setting is explicitly Australia and the characters definitely Australian, it is such a universal story that my head would sometimes forget that. So my inner monologue of each character's lines was still in my native accent. Getting to hear the lovely Australian accent was truly wonderful and I got to experience the story in a whole new and marvelous way.

my first time reading the text version of this book I couldn't put it down until I finished it, and the narration is fantastic and fits so well.

Great Book to listen to

It will frustrate you as Gemma, navigates her life. it was a bit disappointing to find out who He mad first time is with. However i feel it gave Gemma the courage to finally come out of her shell, so you have to respect the story line. This is a wonderful story of real life struggles and self destruction when you agonize over being your true self. it's worth reading for sure. I hope there will be more of these wonderful characters. I really wanna see how Mikey and Gemma are getting along, see Sarah's baby born and what's Natalie up to....
So one can only hope Our Author does us all a sold and continues the story..
The narration was done well, as well as the writing and character development.
This is worth it.

This story starts off very slow. This, combined with some redundancies, almost brought me to returning the book. But, I kept at it out of faith, and man am I glad I stuck with it because it now remains one of my favorite lesbian romance novels. Definitely give it a try. After an hour or two of listening, you will be pleased with its story - a funny romance about friendship and finding oneself.

This story captured me from the start. Being an awkward, nerdy, single woman with a very messy handbag of my own, listening to this story was like listening to a recap of my own life - only a million times more interesting and entertaining. Do I need to say I loved it? Well, I did!

What does Cat Gould bring to the story that you wouldn’t experience if you just read the book?

The Aussie accent brings the story to a new level, it’s really lovely.

Absolutely, I listened to the first four hours in one sitting.

I zoned out so many times, but the main character would still be going on and on about the same thing. Whiny and unrealistic.

The book starts out slow very slow and promising. Then the book degenerates going through extremely dramatic scenarios and adults just making really dumb mistakes to make more anxiety and fluff the book up. It was really straining to follow and I lost interest but I forced myself through all the chapters. If you’re someone into anxiety and really unnecessary book fluff then it’s for you. Main C had a weird fear of a lawyer( Natalie) which was really not warranted. Best thing about this book is the narration.

DNF: MC is a whiny asshole

I really wanted to like this book but it like listening like walking through mud, The story is so agonisingly slow, it which not helped by the seriously bad anxiety the MC has but is never actually address. After coming to terms with her own sexuality she decides it best to lie to her best friend and try to date men. Her other friend who shes confessed everything to really needed to take her aside and ash her why she is being such an asshole. Also she kind of pathetic, she is very much a character in a book, no one is real life is that stupid and idiotic. She gets herself stuch is shitty situation that are completely her own fault that could have been prevented by acting like normal human being.

Honestly not worth the money, though if they trimmed the book down by about 50% it might be a much better book. Way to much fluff and filler.

One of the best I've read in a While

This is the best story I've read in a long time, there were times where I didn't want to go to sleep, I just wanted to see what was gonna happen. I really loved this story, perfect to draw to.

How lovely, a truly romantic book that breaks free from the usual tropes and explores the central character three dimensionally and has a good story and "supporting cast"