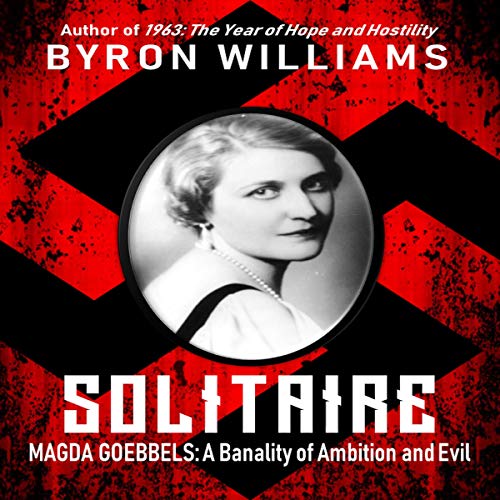 Solitaire is the ambitious, seductive, and macabre story of the "unofficial" First Lady of the Third Reich, Magda Goebbels. On May 1, 1945, after Adolf Hitler commits suicide, Magda murders 6 of her 7 children and sits down to play solitaire in the Fuhrerbunker, as she waits for her husband, Josef, to return so they can execute themselves in the Reich Chancellery gardens.

Magda goes on a retrospective quest for redemption, examining her loving relationship with her Jewish stepfather, Richard Friedlander and her first love, Chaim Arlosoroff, a Zionist leader. She is forced to confront her indefinable desire for "more"...which inevitably leads to the woman she had become - a banality of ambition and evil. Her obsession with her public image as the paragon of German womanhood has blinded her to the humanity of others, including her own. It was a life that ran a parallel course with the rise and fall of Nazi Germany.

First thing: this is historical fiction. I didn’t fully grasp that fact when I started listening, and was a little miffed at my own error, but in this case, the narrator saves the day. Mary Hildebrandt brought a certain level of vulnerability to the character of Magda. Even as Magda unfolds into a soulless monster.

The book is uneven but always compelling. And even as passages made me groan with literary pain (we need to outlaw the words "myriad," and "plethora," from the language. They are words that appear nowhere, outside of the work of aspiring writers) I never wanted to stop reading. This is a soap opera resting atop the foundation of a psychological sketch. There is no subtlety in that sketch. If you ever feel like you're unsure of what's happening, just wait and it all gets laid out, roadmap fashion.

Solitaire is vulnerable to literary critique, and if you're looking for something scholarly, you're in the wrong place, but the story is compelling. I can't vouch for its accuracy, as they relate to established history, but a soapy yarn is spun, and the seeds of future research have been planted. That's not bad for a day's literary work. This book has the feel of a writing exercise that grew legs and started to run, and I was happy too jog along for the ride.

The worst things about this audio book are the awful German accent and the mispronunciation of German titles like Fuhrer. The storyline content is interesting.