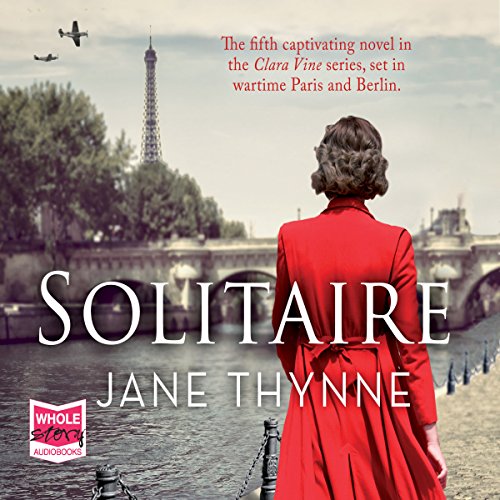 June 1940: Berlin is being bombed. Clara Vine is an Anglo-German woman in a country that hates England.

The Propaganda minister, Joseph Goebbels, decides that Clara should adopt a new role as his spy, and so Clara must go to Paris. Clara realises this might be the chance to escape to England. But Goebbels has other ideas and soon Clara is drawn into a web that threatens to destroy her.

"Just as Victoria Hislop turned the dark history of Crete's leper colonies into absorbing fiction, so Jane Thynne has done for Nazi Germany." (The Times)
"With a clutch of romantic complications thickening the plot, the pace is sprightly throughout [...] the result is an absorbing yarn that's a pleasure to wolf down." (Daily Mail)
"The perfect fusion of history, suspense and high romance." (The Times on Black Roses)

What listeners say about Solitaire

This is part of a series but like the other reviewers have stated it can be read in its own. It’s a great story, I like the way real people from the war were woven into this fictional story, especially the appearance of Ian Fleming together with the Duke of Windsor and Wallis Simpson. The wives of Goebels Goring etc, also came into the tale whilst Clara was in Berlin. It is refreshing for women to be portrayed in a very positive light as heroines, I am sure there were many unsung ladies from WW2 I am sure i will be looking at more from this series, which was read very well by Julie Teal.

I wasn't aware that this book is fifth in a series. It certainly works well as a standalone story and there's sufficient back story to understand Clara Vine's mixed British/ German background.

The setting for this book moves around Europe; Berlin, Lisbon and France. Clara Vine, working as an actress, moves with the elite. High powered Nazis, the fugitive Windsors, en route to their exile in the Bahamas, Ian Fleming and others. Working as a double agent, she's challenged and her loyalties become divided.

This is a clever story, with a convincing mix of fact and fiction. It's fast paced with a sub plot centred on the Nazi program to rid Germany of feeble children and select (kidnap from Polish parents) children with specific Aryan traits. It's a frightening take, and part of history that's largely forgotten and ignored. I found much of the imagined detail very convincing, especially the story around the fleeing Edward and Wallis. What a despicable and shallow couple; they're particularly well portrayed.

Narration throughout was excellent. I was happy that there was no attempt at German accents; the characters still came across well. It's exciting, fast paced and with a few cliffhangers that kept me listening. I'll definitely try other books in the series.

I enjoy stories set during war time that still have an element of what actually happened in that time, and this did not disappoint. in fact it was interesting to have it told more from the German side. A gripping read!

Another triumph for Jane Thynne. Credible characters, great narration and fast moving pace. Hope it's not the last we hear of Clara!

Another classic from Jane Thynne

I love the Clara Vine series, my introduction coming via an amazon daily deal for 99p a few years back. That was a 99p hook from which I have been constantly waiting for the next in the series and often paying the full launch price. This latest story, I had half expected to be the last in the series, I’d been putting it off for ages as I didn’t want to know how the Clara Vine series might come to an end. I’m happy to say, this is clearly not the last. To expand on this one, I bought the audio companion for my kindle book as I’ve recently become a fan of the audio format so that I may continue enjoying the material whilst walking to/from work. Julie Teal is the perfect voice for the Clara Vine series. I will look for more material narrated by Julie. I don’t want to give anything away from the story, it’s simply unfair to do so. However to recommend this series, I’d offer that this is a story about an Anglo-German actress who happens to find herself in Germany during the growing menace of the national socialists, her career finds her under the gaze of the propaganda minister and I imagine partly to keep track on her, she has opportunities to mingle with the wives of some of the socialist elite, giving her access to juicy tidbits of information that allow her to provide intelligence for various factors of the British intelligence services. There are reasons she should leave Germany, yet there are reasons she should stay. I love the main character as well as some of the supporting characters. I adore how much effort must have gone into linking Clara’s story with real life events and on a real life timescale. This writer is simply fantastic and I can’t recommend the writer and the series highly enough.