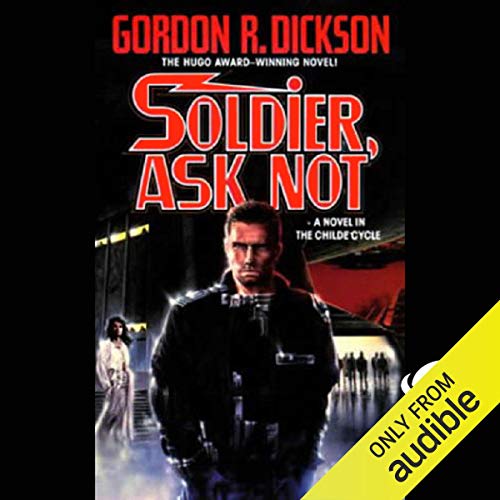 On the sixteen colonized worlds, mankind had changed, evolved into something that was slightly more than human...and slightly less. Men of War on the Dorsai worlds, men of Faith on the Friendly Worlds of Harmony and Association, men of Science, the Exotics of Kultis and Mara, and the Splinter cultures which had produced even stranger new talents. Those who knew said it was the Dorsai who supplied soldiers to the sixteen worlds. The Friendlies supplied cannon fodder, common soldiers who could be relied on to obey orders at all times. But even cannon fodder can sometimes produce genius. Jamethon Black is a true soldier, and a true man of faith. Now he must face a deadly enemy--an enemy whose defeat will forever separate Black from the only woman he has ever loved.

What listeners say about Soldier, Ask Not

As I remembered his books are timeless. I read all dicksons books when they first came out and am rereading them to my complete satisfaction. I adore books that provide some intelligent thought...his books and isaamovs foundation books provide a lifetime of thought

A great rendition of a sci-fi classic

If you could sum up Soldier, Ask Not in three words, what would they be?

Have you listened to any of Stefan Rudnicki’s other performances before? How does this one compare?

A hero's journey from an a$$hole to finding how to live in the Dorsi universe. A highly enjoyable read/listen.

Two Birds as the Case May Be

You have to at least like that. Even if you do not love it such as I do. This is the only way I can get the things done I really need to do and still have time to read a book. Yes it is quicker for me to read a book and then do my work but this lets me do both at the same time so no loss to me.

Thanks for the Memories.

I was looking for a book which would compare to something like Starship Troopers or Forever War. This book is not about soldiering at all so ignore that. It is more along the feel of the Foundation series. The story is patchy and requires you to make a number of assumptions in order to work. It's conclusions are shallow and did not leave me with a desire to return to this storyworld. I would not recommend it.