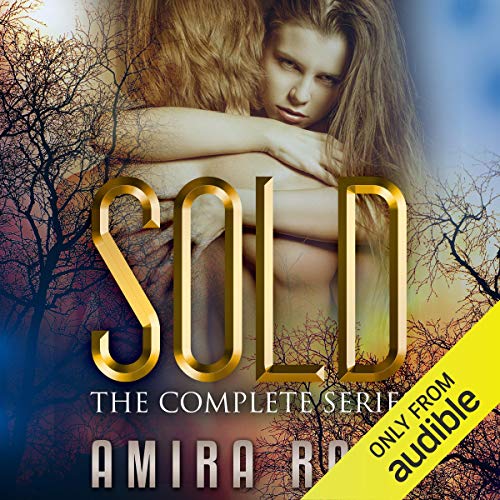 This paranormal shifter romance series is set in a dystopian future where fertile women are so rare that they are now bought and sold like commodities. Each book in the Sold series follows the fortunes of a curvy heroine who has been sold to a pair of hunky shifters with some very interesting (and arousing!) results). Each book features a different type of Wereshifter and can be listened to standalone and in any order!

Sold to the Dragons

Curvy Kira Southerly has resigned herself to the fate of being sold to dragon shifters Blake and Steven. She is initially scared but she finds herself enjoying it much more than she expected, especially when she finds the dragons will have to share her in more ways than one.

Sold to the Bears

Now it is the turn of curvy Lila to be sold to bear shifters Adrian and Grant. Long steamy nights of passion and ménage-filled ecstasy are guaranteed for Lila however she has something else up her sleeve and the bears are in for a big surprise.

Sold to the Alphas

Curvy Rowan cannot bear to watch her sister being given away, so she switches the documents and allows herself to be sold to hunky Alpha wolves Chase and Grayson. Only problem is, Rowan is one of the many infertile women left on the planet. How will the Alphas react when they find they have been sold a dud?

Couldn't put it down!

Loved it! Once I begun listening, I just couldn't stop until the end! I would recommend it.

I was gifted this audio ARC from the author for a honest and unbiased review
Amira Rain did an ok job at this book few editing mistakes but ok.
Meghan Kelly does a great job with tone variations. Her female voices rock. Meghan keeps you listening even when you want to give up.
These books are adult only for sure. Not that I mind but there are a lot of "Sex Scenes"
I didn't listen to this book in one sitting it actually to me awhile to finish them.
I found a lot of the writing was repeated almost like there was a template and words were filled in. I know it's not so. So in saying that the editor must take more care on the editing.
I do recommend this book to those who really love erotic works

I was provided this audiobook through Audiobook Boom at no charge by the author, publisher and/or narrator in exchange for an unbiased review.

Disappointingly shallow and undeveloped writing. Even the editing was done poorly having multiple repeats. And that was one of the writing problems, too... repeating a phrase from last sentence to start the next sentence. Drove me nuts. The cute romances and characters (however underdeveloped) are the only things going for the stories themselves. By the time I got to the Wolf Shifters, it was pretty much predictable. In enjoyment order: (1) Bears, (2) Wolves (3) Dragons.

Meghan Kelly does a great job with tone variations. Her female voices rock. I can't say that she hits the male voices as well. Her tone is perfect — low and gravely, but the inflection is too-much and it ends downward; they sound snooty, vain. They should lean more to monotone with a different cadence than the female voice.

A Waggling Thumb, only.

This collection of books is for listeners who don't need a complicated story line interfering with the sex scenes. The narration is ok but I stopped listening after 9 hours because I didn't think I could stand hearing her say "slick feminine folds" one more time. I tried really hard to finish the collection because I agreed to do a review and it is not fair to the author not to do so. The last half of the collection may be excellent.


7 of 8 people found this review helpful

This series was like hearing the same story three times. Very predictable plot. The narrative was good considering what she had to work with. Overall I was disappointed I spent money on this book series. It was boring. I plan to return it if possible to do so. I’ve been an audible listener for a very long time, and these are the first books I’ve ever wanted to return.

Same plot in every book, with tiny changes.

Rod is the new moist for me with these books. I had high hopes for these books thinking they'd be a good series. In reality I felt like I wasted my time. Do you remember those, "Choose your own adventure!" books from when you were younger? That's what these books feel like. I felt like each one was almost the same story but instead of one shifter group it was another. You first had the Dragons, then the Bears, then the Wolves. They were all so similar that I predicted quite a few of the outcomes.

I can't say that I would in retrospect use a credit on these stories. I had high hopes for them and in the end, I was let down. It was ok, but after the second short story, I kind of lost interest. The summery of the book sucks you in, but once you start listening to the books you realize that things are really repetitive and disappointing. If you don't mind the same concept being reiterated a few times, then these are the stories for you. Its a really good deal.


This book was given to me for free at my request and in exchange I provided this honest voluntary review.

5 of 6 people found this review helpful

Would you listen to Sold again? Why?

I have enjoyed listening to this book. Its starts out early with sex scenes. The story isn't really believeable but its fiction! Its a easy listen. The females are dumb as rocks but whatever. The story flows well. The narrator did a very good job of narrating. Overall its a good listen and worth the credit. Each story relates to the last story which I like.

I like happy endings. I like that sex scenes start early in the stories. If sex is going to be highlighted as a content warning, then it should be full of sex scenes and this book is.

Yes, I cold have but time did not allow.

I was given this book free of charge for a honest review by the author. Thank you for allowing me to review this book. I try to give the most honest review I can, good or bad.

6 of 8 people found this review helpful

I’m so disappointed with the story’s. They are all the same......sex scenes are good but I had to force myself to complete the book. Truly disappointed!

I can NOT make it past chapter 16.

What would have made Sold better?

I cannot make it past chapter 16. The narrator's voice is the worst and will not hold my attention. It almost seems like she is trying for a southern accent and is failing miserably.I actually looked for the complete series of this book and tried so hard to get into it.I can't make it through the first book. Anyone who knows me knows when I start a book I have to finish it, I need to know what happens to the characters. The story line is not developed with the characters which makes it worst. I was told if I can get through the first book then..... well I'm not going to make it. I have to return the book.

Has Sold turned you off from other books in this genre?

That terrible accent she was trying.

I seriously struggled with this book. normally, I am all about shifter romances. The entire storyline was painfully slow, predictable, and just plain awful. I don't have another way to put it. What a waste of money.

Would you try another book written by Amira Rain or narrated by Meghan Kelly?

No I don't think I would.

What was most disappointing about Amira Rain’s story?

Would you be willing to try another one of Meghan Kelly’s performances?

No absolutely not I can not stand her voice. It took me 2 days to finish a 3 hour book. She can not do multiple characters in different voices.

No not really very disappointed in it.

2 of 3 people found this review helpful