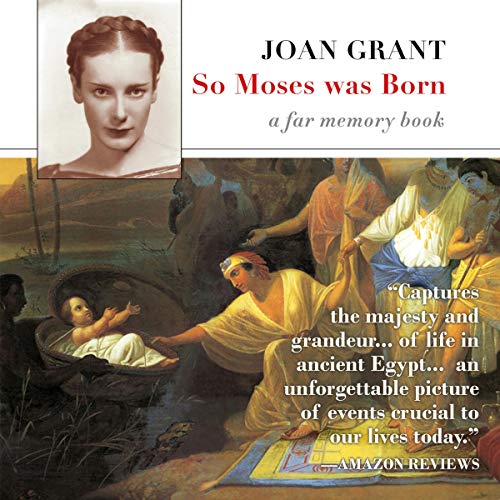 So Moses Was Born

The seventh of Joan Grant's Far Memory novels, So Moses Was Born, is set in Egypt, in the time just before the birth of Moses. The story is a familiar one: Found in the bulrushes, Moses's upbringing in the court of Egypt gave him the influence and power to set the Israelites free. Joan Grant enlarges the picture by depicting the events that led up to the discovery of the baby Moses, convincingly portraying the man she believed was his father, Ramoses II, through the words of his reclusive half-brother Nebunefer. Called back from his chosen exile in the idyllic land of the Living Waters, Nebunefer is asked by the Pharoah to predict which of the children born to the royal concubines will be worthy to succeed him, but as we know there will be another destiny for the baby Moses, child of a Hebrew mother and a royal father.

What listeners say about So Moses Was Born

The first of the Egyptian Far Memory books were a revelation to me.

I wish I wasn't so disappointed with this one.

As I mentioned in my review of Scarlet Feather and Return to Elysium, the later Far Memory books feel less like memories pieced together via hypnosis and more like complete fiction.

The story itself was fine, nothing revelatory, nothing akin to the meaningful philosophy of the first.

What WAS troubling was the blatant anti-semitism.

We know that there were political and ideological struggles between the ancient Egyptians and the ancient Hebrews. I understand that it obviously would color the story of Moses. It felt, however, that the author's existence in pre- and post-WWII Europe stained the characters perceptions in ways that I dont know that ancient Egyptians would have felt. Animosity over refusal to casually acknowledge another god makes sense. The distaste regarding financial agreements, etc, sound distressingly like so many other sneering and pointless barbs.

I admit I may be overly sensitive- but I cant say it didn't greatly affect my enjoyment.

You find yourself engulfed with the words and clarity. Your brain becomes and creates the characters of color in each scenes of your own play.