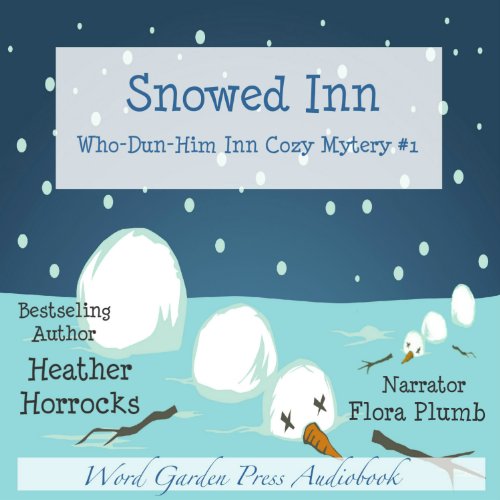 Mystery buff Vicki Butler plans to kill someone this weekend. Nothing personal, just business. The killer grand opening weekend at her new Who-Dun-Him Inn is all fun and games - until an unplanned dead body makes an appearance.

With a murderer running loose, young widowed mom Vicki is forced to keep her family, guests, and actors safe while searching for clues. Her author guests, also the prime suspects, try their hand at solving this real-life whodunit, in the process hindering the investigation by local law enforcement officers.

Things really go downhill when her twin Liz shows up, trailed by flamboyant Grandma Ross, who announces she's seeking a boy toy among the suspects. When both a local younger man and an out-of-town newshound start sniffing around the inn - and her - Vicki realizes she's got more than just a murderer to worry about.

Can she solve the mystery before the killer strikes again - or will this case of jitters prove to be terminal?

What listeners say about Snowed Inn

If you could sum up Snowed Inn in three words, what would they be?

What was one of the most memorable moments of Snowed Inn?

I liked the family dynamic and banter

Have you listened to any of Flora Plumb’s other performances before? How does this one compare?

I hope to see more in this series.

What disappointed you about Snowed Inn?

The narrator of the story in the book is supposed to be a young widow in her late 20s. The actress they chose was in her late 60s and you can tell. She sounds like an old lady. It ruins the story for me. I can't get past it. I tried and tried.

Different narrator would have helped make this a better book, but there were a lot of things that the writer just expected you to take too big of a leap off the high dive of gullibility.

Who would you have cast as narrator instead of Flora Plumb?

I don't have any names, just someone younger, and her Italian accent--Mama Mia! BAD!

i loved it. it's a great cozy murder mystery. a fun read that keeps you guessing.

I thoroughly enjoyed this story with all the twists and turns!!! Fantastic narration. Ready to download the next in the series!

Easy listen perfect book for the car or bedtime.

Friendly language and scene descriptions acceptable for any listeners

best in the series

we learn a lot about Dresden past that was only hinted at before., along with some important life lessons for the future. best in the series in my opinion.