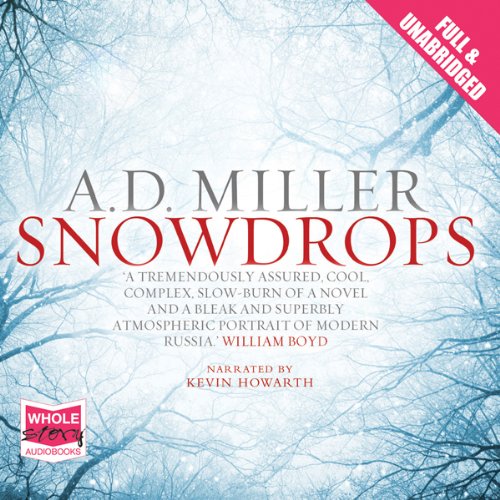 By: A. D. Miller
Narrated by: Kevin Howarth

Shortlisted for the Man Booker Prize 2011

A riveting psychological drama that unfolds over the course of one Moscow winter, as a thirty-something Englishman’s moral compass is spun by the seductive opportunities revealed to him by a new Russia: a land of hedonism and desperation, corruption and kindness, magical dachas and debauched nightclubs: a place where secrets - and corpses - come to light only when the deep snows start to thaw...

What listeners say about Snowdrops

The Man Booker Prize is an eminent guide to what is regarded is amongst the best contemporary writing. As a result I listened to Snowdrops, which was on the 2012 short list.

I will be interested to know what other audible reviewers think of this acclaimed book. Try as I might, I could not become interested in the dreariness of Russia and the characters. The writing was succinct -- very skilful -- and enriched with the details of place. The author captured the sense of an outsider trying to understand where he fits into his old and the new society. The story-line demonstrates how inaccessible a new society can be, however well meaning and sincere the motives of the outsider can be.
The modulations of reader's gentle tone -- he addresses the listener directly -- cleverly reflected the content.

I would not be surprised if other reviewers give 5 stars to all aspects of Snowdrop. My ratings reflect the fact that ultimately I simply was not drawn to any of these people and their lives.

If you could sum up Snowdrops in three words, what would they be?

the narrator because he is the one who is experiencing the truth of modern Russia and its moral degradation while at the same time retaining glimpses of its former glory. He also identifies the human experience of loss of something treasured despite its degeneracy.

What does Kevin Howarth bring to the story that you wouldn’t experience if you just read the book?

His amazing variation of voice brings alive the experience of Russia in a way that simply reading it cannot.

If you could take any character from Snowdrops out to dinner, who would it be and why?

The narrator, the lawyer, because he has been caught up in the moral degeneracy of modern Russia and in the end is able to see it and understand it without discarding it. That's the way it is in Russia and those who have felt it feel a sense of loss on leaving it.

AD Miller is well qualified to write about Russia. He is a British journalist trained at Cambridge and Princeton who was for 4 years a correspondent for

I have thoroughly enjoyed this book. It is refreshing to read foreigner/expatriate's perspective of real life in Russia with its beauty and ugliness well balance. The author is not patronising which is refreshing. Excellent Debut. The only complaint is narrators russian pronounciations. Inaccurate and not really good. However, his switch between british and american was pretty good.

Disappointing and a bit dreary

The actual reading was fine - the story was just a bit dreary and you could see what was going to happen almost from the start. The reading was a bit downbeat which added to the feeling of gloom. Atmosphere was good but it never really went anywhere interesting. So, overall, not terrible, but not worth getting very excited about.

The more negative reviewers may have missed the point with 'Snowdrops'; it's the small details and brutal honesty about personal failings that make the first-person narrative work so well, and it's allied to excellent narration as well. Miller was good writing for the Economist and even better here.

I find it hard to understand why this book made it to the Booker shortlist. The pace is very slow, the characters are dislikable and the conclusion is obvious from about half way through. The reader did his best to inject some life into the story but it was one of the few audiobooks I've listened to that I was glad to finish.

1st person narrative made for audio

Brilliant listen. I'm sure the print version is a great read but the combination of the almost documentary confessional first person narrative of the novel and the narrator's style is surely ideal.

A wonderful book, beautifully read. Highly recommended and enough twists and turns to keep you captivated from start to very satisfying finish.

A short audio book that never really pulled me into the story but did give an interesting insight into life in modern Russia.

Interesting to read about a dark side of Moscow the main protagonist becomes progressively embroiled within. Too slow for my tastes and I didn’t care sufficiently about any of the characters not to ditch this less than three hours from the end.,

One of my favourite reads and narrated beautifully. Superb, I keep coming back to this book.