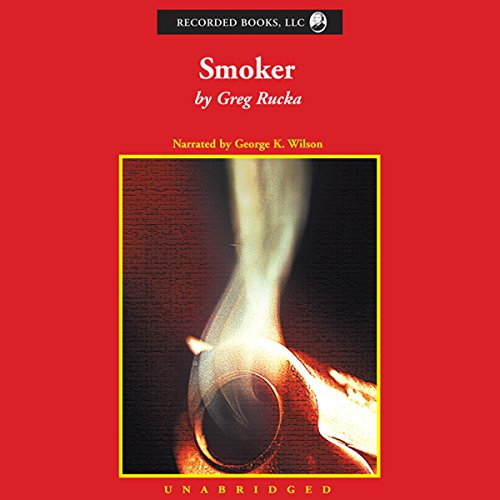 When Greg Rucka’s first novel, Keeper, was published, readers were immediately fascinated by its hero. Alert and skilled, bodyguard Atticus Kodiak could protect his clients from almost any danger, but he sometimes fell prey to his own emotions. This combination of toughness and vulnerability attracted even more fans in Finder. Now, in Smoker, Atticus is about to meet his most elusive foe.

The job sounds straight enough: test the security of the crew protecting a key witness in a landmark case against a tobacco company. All Atticus has to do is make sure there are no holes in their surveillance. But one of the ten most dangerous contract killers in the world is training his sights on both the witness and Atticus. Greg Rucka cranks up the suspense as the boundary between hunter and target begins to blur. Spiced with the latest technological tools of the security trade, zinging with split-second decisions, Smoker is enhanced by narrator George Wilson’s superb dramatic performance.

What listeners say about Smoker

This is my favorite Atticus Kodak book. It captures the underdog tone that runs through all of his books. Greg Rucka is one of my favorite writers. His books have some of my favorite themes/traits, capable professional heros with messy personal lives, jokes, well researched smart solutions to obstacles.

A good story worth listemning to. I shall be seaking out more by this author.