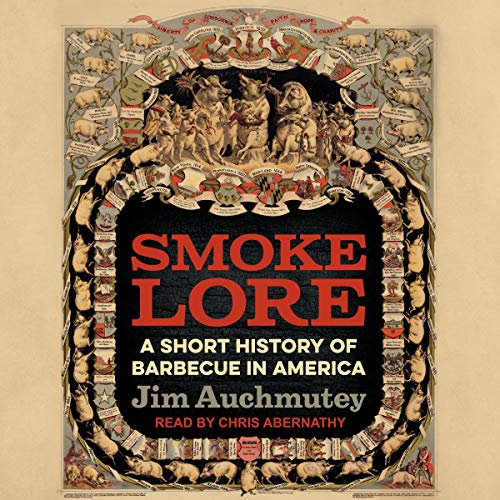 Barbecue: It's America in a mouthful. The story of barbecue touches almost every aspect of our history. It involves indigenous culture, the colonial era, slavery, the Civil War, the settling of the West, the coming of immigrants, the Great Migration, the rise of the automobile, the expansion of suburbia, the rejiggering of gender roles. It encompasses every region and demographic group. It is entwined with our politics and tangled up with our race relations.

Jim Auchmutey follows the delicious and contentious history of barbecue in America from the ox roast that celebrated the groundbreaking for the US Capitol building to the first barbecue launched into space almost 200 years later. The narrative covers the golden age of political barbecues, the evolution of the barbecue restaurant, the development of backyard cooking, and the recent rediscovery of traditional barbecue craft. Along the way, Auchmutey considers the mystique of barbecue sauces, the spectacle of barbecue contests, the global influences on American barbecue, the roles of race and gender in barbecue culture, and the many ways barbecue has been portrayed in our art and literature. It's a spicy story that involves noted Americans from George Washington and Abraham Lincoln to Louis Armstrong, Elvis Presley, Martin Luther King Jr., and Barack Obama.

What listeners say about Smokelore

Good, but reads like a carbon copy of another book.

I love history so I don’t mind hearing about the same stuff over and over, but this book reads almost exactly like “Barbecue: The History of an American Institution” (2010) by Robert Moss in both chronology and seemingly “copied/pasted” text.

If it’s that easy to get a book deal, I’ve got some stories.