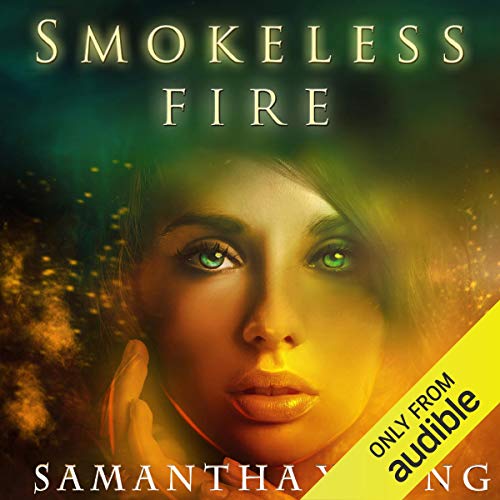 From the New York Times and USA Today best-selling author of On Dublin Street.

When 18-year-old Ari Johnson is transported from her bedroom into the chilling realm of Mount Qaf - home to the terrifying and mercurial Jinn - she learns a truth that rocks her very world. Suddenly her anxiety over college and her broken friendship with Charlie seem like small change compared to the war she now finds herself stuck in the middle of. Her unease isn’t lessened any by the hot guardian, Jai, who won’t stop following her around everywhere - a Jinn whose loyalty Ari hates to question but must. She has no idea who she can trust. When the truth burns through her life in its determination to turn it to ashes, Ari will have to battle with ancient deadly creatures, epic family drama and heart-wrenching romantic entanglements.

What listeners say about Smokeless Fire

Good writing/narration in this YA series beginning

I'm not the target audience for YA books..I'm a 71 year old grannie. However I've discovered some of the most creative paranormal fiction tends to be written for the YA audience. Smokeless Fire is such a novel.

With excellent narration and Samantha Young's always great writing I highly recommend this for any audience who enjoys paranormal mysteries.

I got hooked on other writing by Samantha Young and now count on her as an author who is reliably creative. I haven't been disappointed by any of her works.

I'm looking forward to the next novel in the series that centers on a young woman whose life isn't what she thought it would be.

What about Emily C. Michaels’s performance did you like?

There are A LOT of characters in this series and Ms. Michael's performance was great and easy to discern between characters!!

Wonderful series from a great up and coming author! I highly recommend both the print and audio versions!

I really enjoyed this book a lot. I am sometimes scared to read YA books because I am afraid they will be as full of angst as Twilight was. I was pleasantly surprised. the author does a good job of laying out the events in the story and by the time the book ends, you have an idea was may be in store for the second book, although you don't know how it will play out. I think it's just enough buildup to not leave you hanging. the narrator did a great job with the story as well.

loved the way this story plays out,

love the way this story plays out, couldn't stop listening. Even when I needed to sleep I found myself struggling to turn it off.

A great story line, but its lacking something?

I was really captivated in the first part of the story, it is a paranormal genre and one I was unfamiliar with, the potential to be a great story is there. The characters are interesting enough. Each with complex and intriguing backgrounds and it seemed like its building up to be really fantastic. But it seem to stray or grow stagnate in its progression a little over half way through.
I am still curious to see where the story will go, so I suppose its a wait and see on this one.