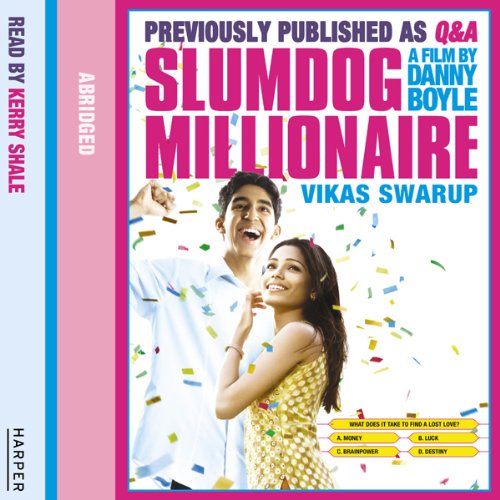 Winner of 7 Baftas and 8 Oscars awards including Best Film, 'Slumdog Millionaire' is based on Vikas Swarup's bestseller 'Q and A', which only took Swarup two months to write!

Read by Kerry Shale, this beautiful award winning audio communicates Vikas' words and narrative to life, allowing the listener to envisage the colour and vibrance of Mumbai and the hard hitting truth of poverty and struggle through the eyes of two young boys and the friends they make along the way. One of the boys comes through it all, knowledgable and determined by answering twelve questions correctly on a gameshow. Stunning an audience of millions, he draws on a store of street wisdom and trivia to provide him with the essential keys, not only to the quiz show, but to life itself.

Adapted for the big screen Swarup's achievement have already been marked by winning four Golden Globes and is not to mention delighted having received eleven BAFTA nominations which are due to take place at London's Royal Opera House in February 2009.

What listeners say about Slumdog Millionaire

A top read which will keep you listening until the very end.

I have never been to India so I have no idea how authentic it is, but it's witty, tragic, exciting and plausible all at the same time.

The narrator does a great job at bringing the story to life, and the story of how a man wins a billion rupees (about US$25 million) is fascinating, with a most interesting twist at the end.

I can thoroughly recommend this book. It is original and most enjoyable.

The title says it all - the book made me laugh and cry... it was beautiful and uplifting at times but depressing at others. It is so well written (with each part of the guy's history re-told as relevant to each question in W3B) and so skillfully narrated. I didn't realize I was getting the abridged version (I normally don't go for abridged) but it felt full of details and complexity to me! I have not seen the movie but I strongly recommend this audiobook!

Loved this. Really got swept away in the atmosphere of India and the "Bollywood" drama of the narrative. Beautifully narrated.

This story touches the heart of any reader!
Good narration flowing easily.
Highly recommended. We listened it in a long driving trip (+12hs) and we were trapped all day long. Listened with my family 2 boys 12y/o.

I downloaded this book after my father had listened to it on Radio 4, I would recommend it to anyone, it is the most original story I have read in a long time.

I am an avid audio book listener and without a doubt this is one of the best books I've ever listened to. The narration is fantastic and really brings the characters to life. The story itself is very emotive and poignant however at times you find yourself laughing out loud. Anyone who has an interest in India and Indian culture will thoroughly enjoy this book as it is extremely eye-opening and informative. The ending is great and has a real twist which the lister/reader wouldnt of guessed, it brought a tear to my eye! I cannot recommend this enough!!

Nothing else for it but superb! I enjoyed this story it was heartfelt and emotional who needs to see a film when you can listen and ingest every detail. My teenage son took this to his room and listened intently every night. I would recommend this as an educational, informative, amusing and sometimes funny story. Great!

I could not stop listening to this story and at 2am was struggling to stay awake but I had to hear the ending. A great book brought to life by brilliant storytellers