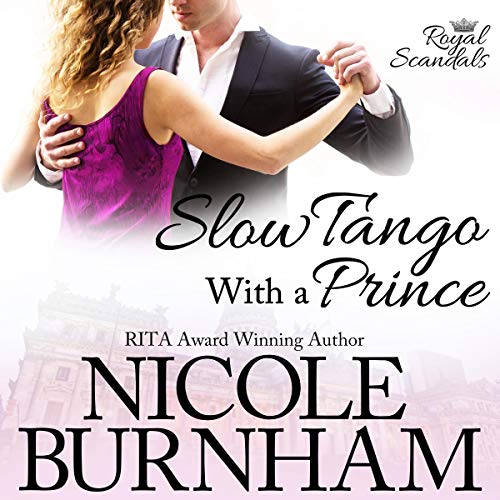 Slow Tango with a Prince

Slow Tango with a Prince

Tormented by the suicide of his ex-girlfriend, Sarcaccia's crown prince Vittorio Barrali escapes the glare of the cameras by secretly trading places with his twin brother and traveling to Argentina. There, he nurses his wounds in private, mentally preparing to resume the role to which he was born, a role that doesn't allow emotion to take precedence over duty.

With her television show facing possible cancellation, At Home Abroad host Emily Sinclair learns the guest for her Buenos Aires season finale is a no-show. Fearing for her employees' careers - not to mention her own - she's elated when a chance meeting in a café provides the perfect replacement. But when the dark, handsome man resists her invitation despite the electricity sizzling between them, her curiosity is piqued. Then there's the fact he looks so familiar....

Vittorio's instinct is to help a woman in need, particularly one as enticing as Emily, whose work supports so many. But can he risk his own secrets coming to light?

How to be private when you are a public figure

Would you consider the audio edition of Slow Tango with a Prince to be better than the print version?

They are both very good - I enjoyed reading the book and also enjoyed listening to the audio version - the voices helped to identify the different characters.

I liked Emily Sinclair - and how she worked to put others before herself, even at the cost to herself.

What does Hollis McCarthy bring to the story that you wouldn’t experience if you just read the book?

She provided a variety of voices

I enjoyed the story about a prince who has to deal with a devastating private sorrow while leading a public life. How does he know if people are with him because of his public figure or himself. It was also enjoyable to get a look at the previous characters and see the different weddings that were happening.

I was so excited to finally listen to the story about the crown prince. Hollis McCarthy continues to bring Nicole Burnham's s stories to life. This was a great story to listen to while traveling for the holiday's.

Slow Tango with a Prince: Royal Scandals Book 3 by Nicole Burnham. Crown Prince Vittorio is in a bad way. His ex-girlfriend committed suicide and he feels responsible. She did not leave a note but instead sent a private message to the palace, further devastating him. His twin Alessandro reads the message and devises a plan to allow Vittorio time to grieve in peace. They will switch places and tell no one. Alessandro assumes the role as crown prince and Vittorio takes off and ends up in Argentina. While he is on the downlow he meets television host Emily Sinclair. With her TV show on the brink of being canceled, Emily needs something to kick start the final episode of At Home Abroad. When her featured couple has to return to the United States for an emergency, Emily spies Vittorio across the way at a café. She approaches him with the proposition that he appear on the show, as the featured house hunter. Vittorio (still hiding out) declines. Emily appears again – raising Vittorio’s suspicions. However, he agrees to help her, under the assumed name of “Bob”. Vittorio and Emily feel an instant chemistry and attraction to each other but both are hiding things and keeping secrets.

Hollis McCarthy again does an excellent job with the accents and characters voices. She appears to have the ability to make them come alive, so you almost feel the emotions that they are feeling. The narration flowed nicely with no stops or stammers. There don’t appear to be any miscues in the reading.

Would you listen to Slow Tango with a Prince again? Why?

Slow Tango with a Prince was far edgier than the other stories within the Royal Scandals Series. Vittorio is tormented by a tragedy that has impacted his life and responsibilities as Crown Prince. The stronger emotions allowed a glimpse behind the crown into the man and his inner demons. For that reason, I would read and listen to Vittorio's story again. It humanizes a larger than life character.

Strength of character is showed by empathy of spirit. Emily and Vittorio both had the capacity to almost sense the pain of others and that made them people who would risk all they had to help others.

Have you listened to any of Hollis McCarthy’s other performances before? How does this one compare?

For me it's hard to compare because the stories and the characters that live them are so different. What I will say is that Ms. McCarthy has the ability to allow the listener to forget that they are listening to a story, because she makes them feel a part of the action with her care of delivery. She presents a masterful performance.

I would have loved to listen all in one sitting, but the drama that is life got in the way. When I did have to stop and come back, I was able to effortlessly pick up where I left off with missing a beat.

another american gets a prince!

Nicole Burnham has a way with romantic words and the perfect voice to bring them to life in Hollis McCarthy. Lots of humor and a fun story that takes on a life of its own. A great quick pick-me-up listen!

Nicole Burnham and Hollis McCarthy have provided another excellent book for our entertainment. I absolutely love Hollis McCarthy's soothing voice. She perfectly adds emotions to the story just as I would while reading it myself. Which also speaks to Nicole Burnham's superb writing skills of pulling one into the lives of her characters. Even though each story is written as a standalone, one cannot help but want to listen to/read all the books in this series. Especially since there seems to be one "story" that seems to be unfolding through the series. I'm am looking forward to the next book!