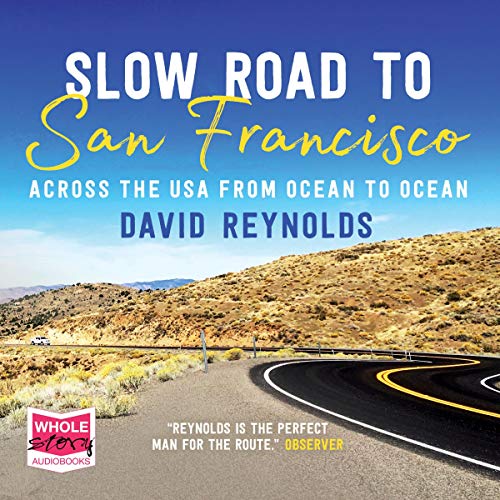 Travel across the United States with David Reynolds as he explores US Route 50, one of the few remaining two-lane highways running from the Atlantic to the Pacific.

Driving as slowly as safety permits, stopping frequently and often going backwards to have a second look at something glimpsed in passing, Reynolds talks to people on the streets, in bars and cafes, motels and gas stations. They talk about everything from slavery and the traditional Indian sundance, to cannabis in Colorado and tornadoes in Kansas, and about everyone from George Washington and Aaron Burr to Marilyn Monroe and the Eagles, and everyone has something to say about Donald Trump - love him or hate him.

David Reynolds was one of the founding directors of Bloomsbury Publishing. His first job was on the legendary Oz magazine. He is the author of Swan River (shortlisted for the Pen/Ackerley Prize) and the critically acclaimed Slow Road to Brownsville.

"Ride shotgun with Reynolds as he pit-stops at diners and gas stations, and detours by way of legendary landmarks, where he reflectively enjoys cracker-barrel wisdom, saloon-bar wit, and good-ol’ country wackiness." (The Times)

"Reynolds is the perfect man for the route." (Observer)

What listeners say about Slow Road to San Francisco

'Blue Highways' this is not...

Reynolds' effort to "discover the 'real' America" by making a solo journey along a secondary route, in this case US Hwy 50, across the United States falls completely flat. He neither uncovers much about the country, nor, perhaps more unfortunately, discovers much about himself during his slow-paced journey. Rather, he starts his journey with strong, preconceived opinions and biases, and his encounters, or at least those he chooses to write about, only reinforce his prejudices, which he carries from Maryland all the way to California. What could have been an opportunity to either grow personally or discover the beauty and diversity of America away from the Interstate Highway instead turns into not much more than a pub crawl across America along Hwy 50. It goes something like this...stop in a small town bar, ask a local Bar Fly how they feel about Donald Trump, drink a beer, order fish (even in a BBQ joint) check into the local motel, comment on the toilet paper, then repeat. About 30 times. I'm not kidding, that's pretty much how the book goes, on and on until it's finally over. Reynolds' conceit towards the United States and its citizens is never too far below the surface. Reynolds' effort was doomed from the start by the writer's unwillingness to expand his personal horizons by going outside of his comfort zone, be it in the people he chooses to talk to or even the menu items he orders. Bentick's performance is passable, but without fail his attempt at an American accent sounds like a blend of John Wayne and Mark Twain, regardless of whether he's attempting an Eastern US accent, a Southern US accent, or a California accent. I managed to listen to the entire book, but overall it was not worth my time or the use of a credit.