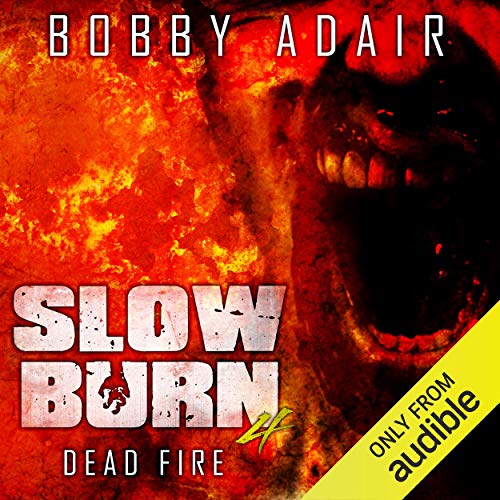 Dead Fire picks up following an infected attack on Sarah Mansfield's fortified house, during which three people seek shelter with Zed Zane and his fellow survivors. In the confusion, however, Murphy is gunned down, and an unthinking, emotional Zed strikes out to enact revenge. Unfortunately, the shooting and commotion have only attracted more Whites. A diversion plan emerges to rid the horde of the Smart One trying to figure a way through the gates, and lead the other infected away from the compound. Momentarily safe, the survivors turn to the matter of where to bury the dead.

Zed, being now the only one available who would not attract the attentions of the infected, accompanies Freitag on this morbid mission. In short order, Zed is once more embittered and hardened against trust, when he finds himself stranded. After a series of developments that prove the Whites to be more formidable foes than he ever dreamed, he finds his way back to Sarah's house to find the compound overrun with infected and his friends mysteriously vanished without a trace, leaving Zed to rely once more solely on his wits to survive.

Why Half A Book?

I'd like at least 10 hours out of a book. Combine 3 of Fuchs books and you'd feel like you're getting your money's worth. The story is great, but I don't like burning a full credit for a novella.


i have enjoyed the previous 3 slow burn books, and dead fire is another good episode. i call it an episode b/c the stories are so short. i'm glad they released a box set so others, who may not be hard core zombie aficionados, can see what all the excitement is about. but like i mentioned in an earlier review, these short stories / episodes are expensive! but to me, they're worth it!

the publisher's summary does a good job detailing where the story picks up. i can't say much without spoiling your listening experience so i'll say why you should pick up this book, either now or when the next box set comes out.

as we've found out, zed's smarter than we thought, and his philosophy degree is finally paying off! LOL anyway in previous books, zed has noticed an emergent behavior among the whites. in this episode, we finally get a look into how this has developed and who has started it! and an old enemy is back, and zed is out for blood!

what i like about these stories and this one in particular is that even though you can see where the plot may be heading, the author resolves the situation in an unexpected and unpredictable way, which keeps the story fresh.

overall, this is another action-packed episode of slow burn. the author does a good job pacing the story and keeping it fresh and interesting. this episode ends at can't wait for the next one to come out!

This was hands down my favorite in the series! Great story line & well written. The narrator seemed to relax and tone it down too (he was a bit much for me at times in the previous books). I really enjoyed the entire ride.

Good just needs to be longer

Good story and the narrator has gotten better. our
Only problem is it is too short and should be put together with next one in series that is short also.

the narration was a little better ,but still not on par with others . overall enjoyable though

this is the third time I've either read or listened through Audible . I am proud to own all books of this series and wish they would make a movie out of all the books. .

Trying to read all in the series. Avery good read, engaging. Read while doing things, awesome.

Nice Twist on the Zombie Thing

I'm really enjoying this series. It reminds me of the Monster Hunter series by Larry Correia but w zombies and a much less annoying narrator!

I want more of a read in each book. I like the storyline, plot and character development. I want more!

I love the details and storyline in the book. The reader does a good job keeping the people in the book alive and the emotions real.