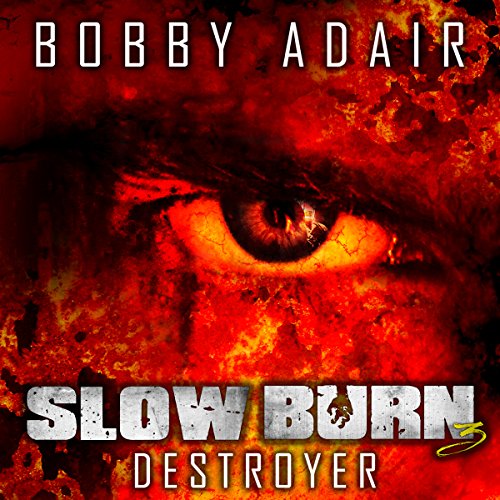 Destroyer finds Zed saying goodbye to one friend and pressing forward with two new ones to whom we are introduced in Book 2 - Infected. Mandi, whom Zed and Murphy rescued from the bunker, is immune to the virus. Russell, whose home the others plundered in search of food and other supplies, is also a slow burn, but lower-functioning, childlike, and docile.

After seeing the carnage at the dormitory, a raging, vengeful Zed wants only to kill Mark, his nemesis and the former leader of the ROTC squad. Since Mark has disappeared, Zed unleashes his fury on untold numbers of infected in his path as he makes his way back to the hospital, in an attempt to rescue Steph, a nurse whom he befriended while seeking help for the feverish Murphy shortly after the prison riot.

But the brave medical staff, holed up on the 10th floor of the hospital, and running out of provisions, has decided to take matters in hand by exposing themselves to the virus and shooting those who "turn". Zed is determined not to face another loss, but once again, time is running out.

What listeners say about Slow Burn

destroyer is the right title!


this is my favorite of the 3 books! wow! zed really loses his $hit and goes crazy! i really liked that the author finally got to the hospital. there's a lot of action, and zed really needs a dose of the ogre and the harpie to get through what he has to do! the hospital scenes are really good.

destroyer focuses on zed. murphy kinda takes a back seat for most of the story. a few new characters are added to the story. the casualty rate is high, and you never know who's going to survive, which is always a plus in my book. the hoard scenes are intense and well thought out. i like how nothing comes easy.

overall, a good continuation of the story!

Well, now I have to buy all of them


Story gets better and better as you get invested in the characters. Narration at a goo speed.

This series is a great take on the typical zombie book. The way the infection in these books is spread as well as its effects seems much more realistic, although I'm not sure if medically accurate. Very well written and narrated. Can't wait to buy the next one! Great listen for long road trips!

Why Half A Book?

I'd like at least 10 hours out of a book. Combine 3 of Adair's books and you'd feel like you're getting your money's worth. The story is great, but I don't like burning a full credit for a novella.