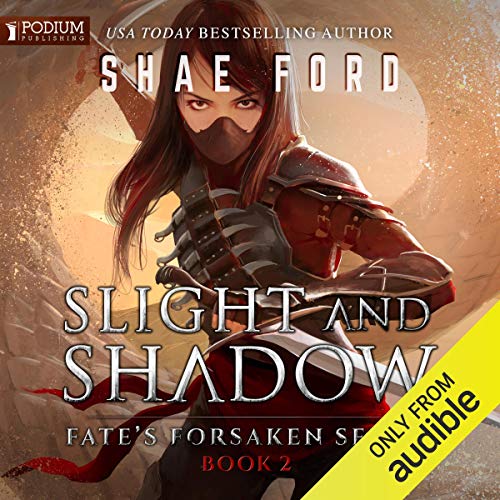 Winter has finally broken its hold over the Kingdom - but as the snows melt, trouble springs up in its place. A dark cloud hangs over Midlan: The army has retreated behind its high walls, not a word slips out from between its gates. And rumors swirl that the King has gone mad.

Kael knows nothing of this: His sights are on the plains. But with his horrible luck following him wherever he goes, it doesn’t take long for his plan to unravel. He finds himself trapped in Gilderick’s clutches and forced to work as a slave, laboring alongside the giants - who don’t exactly welcome him. In fact, he begins to suspect that some would rather see him dead. If Kael is going to have any chance to survive, he’ll have to come up with a new plan - and quickly.

Meanwhile, Kyleigh finds herself locked in a sprint across the desert. Time presses against her: There is a force gathered in Whitebone that threatens to undo everything, should it reach the plains. But her pride blinds her to the dangers, and it isn’t long before she and her companions are lost among the towering dunes. The strange magic of the sun drains their strength, misfortune nips at their heels, but they are determined to save their friends. And so they’ll brave the desert’s every peril - be it storms or cave trolls…or flesh-eating worms.

What listeners say about Slight and Shadow

Felt like a mix of romance and fantasy. Not ideal. Personally I feel as though an epic fantasy story should be just that, epic. Leave the lovey-dovey stuff to the soft at heart.

loved all the books..funny and heart wrenching...Derek Perkins is great as usual...thank you Shea Ford for your vision

This series should never end!

Don't let the cover of the book hold you back. It did for me. I passed over it several times then finally took a chance on it. You'll fall in love with the characters as well as the adventure!

What is great about this book / series... is that their are perfect amount of character's that come to life without being overwhelming. At the same time leaving room for you to see each one of them as a large role in the story line... Keeps you wanting more...

Good for a fun listen but not a strong epic.

While I enjoy this series, it's focused more for younger readers I believe. There are too many coincidences and convenient solutions for a serious epic fantasy. If you go into it accepting that, it's a fun listen. The narrator is great though.

It's been such an enjoyable series that I couldn't wait for my next credit so I took the time to purchase the next and last book that there is! Well at least I hope it's not the last book!

I really enjoyed listening to this book! You won't be disappointed!
Can't wait to hear more 😀

can it get better?

I'm not sure but I am looking forward to the next book in the series!

As a stand alone book I would not buy it. But it was acceptable because it was part of a series, plus it was an audiobook.

There are two stories in this book. Kyleigh and Kael are in separate lands - traveling. Kyleigh is sort of taken prisoner by the Mots while Jake is healing. Kael is made into a slave with giants who are slaves. He doesn’t leave the giants because he wants to help them and fight against Gilderick the evil ruler of the plains. The author flips back and forth between the two stories. The stories dragged. But parts of them were kind of good - meeting some of the interesting characters.

I did not like one part. A couple loves each other but the author wants to keep them apart and therefore has one of them lie to the other. The lie did not fit motivations. It left a bad taste for me. See spoiler.

CAUTION SPOILER:
A confessed love for B. B lied and said they did not love A. The lie was not honestly motivated. When you love someone and you can’t be with them you tell them why. B could have told A there was a reason and what that reason was. But instead B hurt A.
END SPOILER.

THE SERIES:
This is book #2 in the four book series Fates Forsaken. I read the first two books and part of the 3rd book. I lost interest - partly due to other things going on in my life. One of my friends rated books 3 and 4 the best. Give it a try if you’re in the mood for this genre.

Good story, great narration. Derek Perkins could read me the dictionary and I'd be in to it. Shae Ford can write a story, too.

Its a good read

What was one of the most memorable moments of Slight and Shadow?

When Lysander learned his wife is pregnant.

What does Derek Perkins bring to the story that you wouldn’t experience if you just read the book?

He have a totaly unique voice, and you can always tell which character is speaking. I've heard many of his works and I am impressed. He is definatly one of the better Narrators out there!

If you read the first book and remember the ending and absolutely hated it (Like me) He does pretty much the same here eccept slightly on a happier tone. 99% of the book was near perfection but the ending completely ruined any satisfaction i might have had, and now im sitting here annoyed and sad. Ruins the experience for me, I had fun listening until the ending got my knickers in a twist. If it had been a proper ending it would have been a 5 star for me. As it is I will have too settle for 4/5.

Good story. I was interested to hear what would happen next and looked for reasons to listen, however it did slow down a bit in the middle, but stick with it as it does take up again. This story is not deep, so dont expect "Lord of the Rings", but enjoy it as light entertainment. I will be buying the next one.

A reasonable story, very well read that will keep you going until the end. However, having made her two main characters too powerful, there were times where it felt like the author struggled to artificially limit them to preserve the tension, which often resulted in the characters forgetting to use powers they'd already shown earlier in the book, and which would have made light of the drama now unfolding. There were also times it seemed like you could feel the editors touch, leaving it seem a little clumsy.