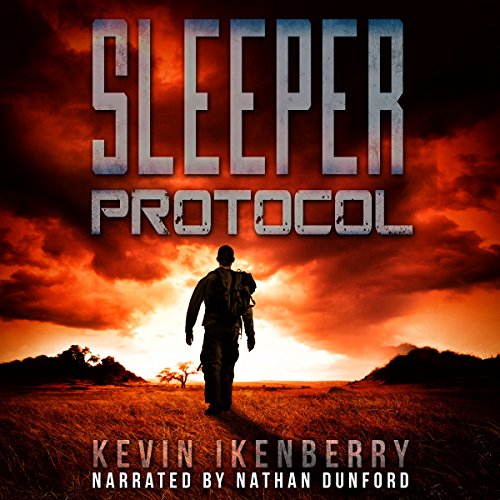 Kieran Roark awakens in a wheelchair, unable to remember anything. As part of a classified experiment, he will have one year to learn his identity and recover his memory, or he will be euthanized by the state.

Scientist Berkeley Bennett has one mission: manipulate Kieran's emotions in an attempt to bring back his memory. But when she falls in love with him, she is forced to make a harrowing decision that may cost Kieran his life.

What Kieran knows could save Earth from a coming war. Whether he believes the future is worth saving is another matter. Racing across an unfamiliar world in a body he does not recall, Kieran needs to discover who he was and, more importantly, who he is.

What listeners say about Sleeper Protocol

Sleeper Protocol is by far one of the best narrations I have ever listened to. The plot is outstanding and very realistic. I can see this coming true and it would make a wonderful movie. I was hooked from the first page until the last. The author gives you a plot based on the future when there are no need for soldiers, the wars are over or so they believe. The land changed forever, nothing is as you remember it with so many shocking changes that leave you wondering what the heck happened. The author gives very vivid details you can picture each scene. There really isn’t much filler at all just thrills, adventure and action at the best. One group decides to play with nature changing the way a human thinks, feels and wants in doing so they have taken one man waking him up not knowing who or what he is. There is another group that you aren’t sure just what they plan. You know how it is when you plan things it never goes as you want. You are in for a wild ride and loving it all the way.

They send him on a walk about without answering a lot of questions. He has a prototype in his brain that will help him as he needs. He needs to work through stages to find who he is and decide what he will do. He is lost in more ways than one and must work through not only his future but his past. There is danger all around with people who want him dead and one who wants him to succeed at any cost. The question is will he and what will it cost him?

I was blown away by Mr. Dunford’s narration from the first page he pulled me in leaving me hanging on his every word. I do not know how he did the sounds effect but they sounds natural and robotic just as one would picture it to be. He has a wonderful strong voice that you get lost in, there were no repeats of words or any place where the volume was higher or lower. If any breaks were taken I could not tell. His character voices are just wonderful, his female voices were great as was his males. You always know what each character is feeling with powerful emotion he deliveries throughout the audio. I am just blown away with how realistic it sounded. I had no trouble picturing the story and scenes as they unfold holding me captive from start to finish. There are no background noises just a clean, crisp, clear outstanding audio that I could not put down. The sound effects are out of this world pulling the reader in from every corner giving you a story you can’t put down. Walmart just loves me when I get so into the listen I keep shopping so I can listen longer. This is one narrator that knows how to perform keeping you invested and very entertained. I am so looking forward to listening to more of his work.

The author put a lot of thought into writing this story making it very believable. The first thing that came to mind is wow that is just amazing. The next thing was this is how I see the future he nailed it right on the money. There is romance and passion along with excitement, danger, lots of questions and a wonderful ending. Your heart really goes out to Kieran leaves you wondering how someone could do this to him and then you fall in love with him as he works through it all to find out who he was and is. When he finds romance you wonder just how this can turn out good. Then there is the prototype that throws a spin in the plot. Just when you think you have a handle the author changes direction leaving you with your mouth hung open at times. There are twists and turns that surprises you and pulls you in. Berkeley maybe a scientist first but she is a woman with feeling and falls for Kieran. I was excited for them both but all is not good with people hunting them down and many more issues they will have to deal with. The really made a great couple. She can do so much for him but she could be the death of him.

The ending is wonderful and so unexpected. There are a few places you will be sad at the unknown and your heart will break. There were places I just closed my eyes and hung my head. I was so into this that the characters became real to me. I held my breath a time or two and even did a little yelling. This is well written with the author leaving it setup for book 2. I so want it now and cannot wait for it to come out. 5 Star plus from start to finish WOW just WOW loved it. I really can’t say anymore or you will not be surprised when things happen. You will be very entertained and glad you picked this up for a listen. I want to say thank you to both the author and narrator for really giving me a wonderful wild ride that keep me hook and entertained for hours.

Awesome. Couldn't put it down.

Buy this now. The author is a genius. This story should be made into a movie. Easy to listen to and narrated well. Loved the character development. I was both amused and freaked out by Mally. Made me think twice about artificial intelligence.

The subterfuge was quite thick uncovering the real reason for deceit held me to my seat through the very end. I sure hope there's a sequel!

This is a very well written and well narrated audiobook. The storyline is strong, the characters very believable and plot well thought out and compelling. I generally listen to audiobooks on my drive to work, but found myself looking for reasons to plug the ear buds in and listen more.
Bravo Mr Ikenberry and well read Mr Dunford.
I can't wait for the next book, in what I hope, will become a series of novels.
I would like to thank the author/publisher for providing me this audiobook, via Audiobook Boom dot Com, in exchange for an unbias review.

great start to a new and different story

This audio book was given to me to review. The story is very interesting and has a different twist. I enjoyed it and cant wait for the next book in this series.The narration was very good and the story moved at a good pace. Interesting story line with enemy's from earth and outer space.

I smell a series here!

Both books I have listen to by Ikenberry have been great. Enjoyed the story here with a lot of potential for a great series. Well worth the credit.


"This book was provided at no cost for review"

I received this book free of charge for an honest review. wasn't to bad, don't really get very into this type of story but it's worth a listen, I think what kept my attention the most was that it was almost like a prequel to another book I recently listened to with just a couple different aspects

What did you love best about Sleeper Protocol?

I read the print version of this book already, and loved it so much I had to get the audio too. Amazing how audio brings out the humor in one-liners and intensifies the suspense.

Every single character has depth and personality. Ikenberry showed superb craftsmanship and a deft handling of the storyline. The ending will blow you away.

What does Nathan Dunford bring to the story that you wouldn’t experience if you just read the book?

Nathan Dunford has a million different voices. Hard to believe one guy can range from bitchy Frenchwoman, to Aussie barman, and back to American soldier again. Great job.

Never trust the voices in your head.

Truly spectacular effort. Hats off to the author.

A thoughtful look at an almost-utopia

The thing about utopia stories is the good ones always poke holes in what we think a utopia should be. What if we reached a society that had almost no war and no money and seemed on the surface to be humanity at its best? Would that be the ultimate end, or would we still have some growing to do?

Sleeper Protocol looks at a society like this through the eyes of a 21st century soldier who's been revived a few hundred years later. The world's been through a lot and come out on the other side, but Kieran finds they've lost some things, too, and he might be the only hope to get it back.

This is a character story at its core, and Kieran's journey is one of self-discovery, and how someone with Kieran's ideals fits in a world that's lost its center. I loved his self-revelations, which were wonderfully transcendent, though I didn't care as much for the romance between he and Berkeley, especially at the end.

The narration was great, though sometimes the pronunciation was a little off. But not too distracting.

Overall, this book made me think about a lot of things while following Kieran through his journey. I'd definitely recommend it.

Highly recommend this book. I have not really been into science fiction for many years, but this book caught my attention and held it from beginning to end. As a military veteran, I particularly enjoyed certain realistic details that so many other authors miss. I am waiting (im)patiently for his next book, which I understand is in progress. In my opinion, the narrator does a very good job conveying the character of the various personalities throughout the story.

It takes you very little time to fall into this amazing story of self preservation, love and deceit. The future is built and we must follow along and reacquaint ourselves with the universe!
Well written and performed. Highly recommended!