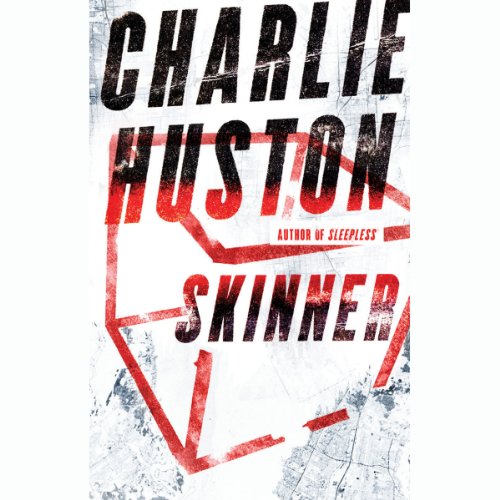 Known by the name of the psychological experiment that fostered his emotionless brutality, Skinner founded his career in "asset protection" on fear. To touch anyone under Skinner's protection was to invite destruction. A savagely effective methodology, until Skinner's CIA handlers began to fear him as much as his enemies did and banished him to the hinterlands of the intelligence community.

Now, a cyber-terrorist attack on the US power grid is about to end that long exile. His asset is Jae, a roboticist with a gift for seeing the underlying systems violently shaping a new era of global guerrilla warfare.

At the root of is all is a young boy, the innocent seed of a plot grown in the slums of Mumbai. Brought to flower, that plot will tip the balance of world power in a perilous new direction.

A combination of Le Carre spycraft with Stephenson techno-philosophy from the novelist hailed by the Washington Post as "the voice of twenty-first century crime fiction," Skinner is Charlie Huston's masterpiece - a new kind of thriller for a new kind of world.

What listeners say about Skinner

Huston's Skinner is an intriguing variation on the espionage thriller genre. The title character is so named because of have spent his early years as an experimental subject by his parents, in a box isolated from the rest of society (in the psych field, this is called a skinner box). Skinner is basically a highly intelligent, high functioning autistic sociopath who specializes in "asset protection" or basically a personal bodyguard for someone that is the target of others. In this case, Skinner protects a woman renowned for her "supercomputer-like" brain that can discern patterns and piece together the big picture particularly useful in intelligence / spy fields. The duo is on the trail of an apparent cyber attack on the US electrical grid that has led to several deaths.

The sci-fi elements are minimal with some loosely relevant small robots and nondescript computers and software. The timeframe is current. The story concerns the detective work piecing together all the disparate connections which leads to a totally unexpected plot twist at the end. The appeal of the tale is the interaction between the two main, but mostly asocial characters. The story is related in a nonstop series of staccato bursts both in terms of actions and dialogue that offers a glimpse into the minds of these two fascinating persons.

The narration is outstanding and mirrors the tenor of the author's intentions with a unique perspective into the thought processes of the individuals.

Invasion of the Body Snatchers

What would have made Skinner better?

What could Charlie Huston have done to make this a more enjoyable book for you?

Have you listened to any of Jay Snyder’s other performances before? How does this one compare?

What character would you cut from Skinner?

My first Charlie Huston book was Sleepless, which was a solid Five star excellent distopian thriller. I liked it so much I've listened to it 3 times. I'd put Sleepless right up there with Stephen King's The Stand. Since then I've tried several of his books, hoping for that same quality (and haven't found it yet). Its almost like Sleepless was written by someone else. With Skinner, in the beginning I thought yeah, this could be good. But no, this book consisted of brief spurts of action separated by long periods of boring dialog and lots of "feelings". Who knew an assassin could be so deadly and efficient and yet so sensitive at the same time. But that wasn't the worst thing about this book, three quarters of the way through the author starts beating me over the head with this liberal dogma, best summarized as the world is going to Hell in a hand basket because citizens of the US and Europe are selfish, exploiting and greedy and screwing over everybody in China, India and Africa. Oh yeah, and the world is going to end because of Global Warming. When I read or listen to a book, I want to be entertained, not brainwashed or preached at.

Skinner is NO Victor! He really doesn't even seem to be a lead character.
I finally stopped listening at the epilogue. Boring.

Kind of blaise about this one...

I have to start out by admitting C. Huston has been my favorite author (currently writing) for at least the past 5 yrs, so I probably gave Skinner one more star than it deserved for that reason.

Skinner came across, to me at least, as an idea he might of had as a movie script but it fell through and "might as well make it a book". Interesting main character put in a hero's situation where it is him vs the powers that be. Unfortunately, the book just misses. It didn't have the gritty pulp-noir feel to it that I associate with CH. Or the character development. Or the breakneck feeling of events racing to a climax. It just misses... something.

I had been waiting for his next book (Skinner) very impatiently and finished it in 2 sittings and was left with a feeling that I had just wasted my time. That's a pretty damning thing to say about a book, but there it is.

I just finished listening to the audiobook and the experience was no different. And I wrote that just now and realized I was desperately looking for something good to say, but that I can't think of anything positive about this book. It didn't actually suck, but it also wasn't good.
Like the headline says, just kinda blah...

I'm a fan of Charlie Huston's other works. However this one was very irregular in the way the story was told and jumped about. The characters never really caught on. Something about it just never grabbed me. Perhaps I'm prejudice regarding the stories subject matter, having been a contractor for the US gov's alphabet soup agencies in the bitter post 911 climate. A case of reader nit picking? Maybe. Irregardless, this feels like one of those unfinished novels an author digs out of his or her bottom drawer to fill a promised quota. It falls short of his other works by comparison.

Would you ever listen to anything by Charlie Huston again?

I love Charlie Huston's work. This story was awful, however.

Who would you have cast as narrator instead of Jay Snyder?

Any other human on the face of the earth (or Mars)

I want a refund. Not kidding.

Would you try another book from Charlie Huston and/or Jay Snyder?

No for Charlie, yes for Jay

What character would you cut from Skinner?

I did not enjoy this book. I found it hard to work out the story and I found it quite disjointed. Due to this I did not get past the half way through chapter 5. I would not read another of this authors as it was too disjointed for me.